2000 New Zealand women’s Sevens team | Where are they now?

The first official New Zealand women’s Sevens team was selected back in 2000, after unofficial sides had contested the tournament in 1997 and 1999. The New Zealand team took part in the Hong Kong Sevens, winning the final against Australia. The team was coached by Darryl Suasua.

We take a look back at the 2000 squad and see where they are now, 20 years on. (Black Ferns Sevens cap number listed).

Sharleen Nathan was a midfielder for Manawatu and like all of this Sevens squad from 2000, also played 15’s. Nathan got into coaching, with the Manawatu Farah Palmer Cup side, RedBull Ignite7 and at Hamilton Girls High School, where she is the Deputy Principal and head of the rugby programme. In 2018, Nathan was appointed as a Future Director on the board of the Chiefs Super Rugby club.

The Auckland winger debuted for the Black Ferns 15’s side in 1998 and went onto play 12 Tests for New Zealand. She was a speedster on the wing and loved to score tries. Up until 2012, Kahura alongside Louisa Wall still held the record for the most tries in a provincial season with 14. 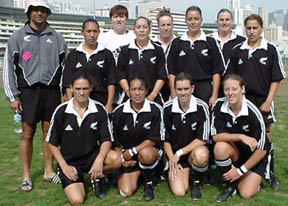 The Auckland first five-eighth is a stalwart of the women’s game. She represented New Zealand at four World Cups and is the second-highest capped Black Fern (behind Fiao’o Faamausili). Richards was inducted into the World Rugby Hall of Fame in 2014. She coached the Barbarians last year in their first Test victory over the USA. Now she works at Auckland Rugby as the women’s player development manager and she’s also the assistant coach of the Auckland Storm. The women’s player of the tournament at the National Sevens receives the Anna Richards Cup.

The Auckland centre also represented New Zealand at the 1998 and 2002 Rugby World Cup. She is the sister of former All Black Xavier Rush. At the peak of her rugby career, Rush was a teacher and she went back to University to complete her master’s degree. She still holds the record for the most tries in a women’s domestic game, with eight. Rush won the Women’s Player of the Year award at the New Zealand Rugby Awards in 2001.

Aucklander Suzy Shortland was a member of both the Black Ferns and Black Ferns Sevens. The midfielder played 18 Tests, including being a member of the 1998 and 2002 World Cup winning sides.  After her international career, Shortland continued to play club rugby for Marist in Auckland.

Wilson was another Auckland Marist player, who played both sevens and 15s, as well as touch and league at international level. Wilson is a double World Cup winner, in 1998 and 2002. Known for her impressive kicking game, Wilson continues to support the game, as a board member on the New Zealand Rugby Players’ Association.

20 years after debuting for the Black Ferns Sevens, Gould is remarkably still playing at the highest level. Now plying her trade across the ditch, Gould has played for the Broncos in the Women’s NRL and for Queensland in the Super W. Gould played in four tournaments for the Black Ferns Sevens and most recently she could be seen playing at the TECT National Sevens for Otago before returning back to play in Australia.

Flanker Sherry Hansen continued to give back to rugby after her playing days, with a coaching stint at Ruapehu College.

Bay of Plenty’s Noi Kurei has been a regular on the club sevens scene, most recently representing Opotiki.

"Representing my country for the first time was a dream come true."

Sevens speedster Michaela Blyde chats to Izzy Dagg about the first time she played for the #BlackFerns7s.