A rivalry in numbers: All Blacks vs South Africa Another chapter will be written into the rich history between the All Blacks and Springboks when the two old foes clash at Westpac Stadium.

Check out the key numbers from the New Zealand-South Africa rivalry as the All Blacks seek revenge for their loss to South Africa on the same ground last year.

QUICK TAP: WELLINGTON WIN PRE-CUP GOAL FOR SPRINGBOKS
97: The All Blacks and South Africa have met 97 times in Test matches with the All Blacks winning 58 matches, South Africa winning 36 matches and three matches being drawn.

57: The All Blacks highest score and winning margin against South Africa was achieved in the 57-0 victory at Albany in 2017.

2: Since South Africa suffered a record 57-0 loss to the All Blacks in 2017, the following three Tests have been decided by a margin of two points or less.

11: A remarkable 11 tries were scored in South Africa’s 34-36 victory over the All Blacks at Westpac Stadium in 2018. The All Black scored six tries (Rieko Ioane 2, Jordie Barrett, Aaron Smith, Codie Taylor and Ardie Savea) to South Africa’s five tries (Aphiwe Dyanti 2, Willie Le Roux, Malcolm Marx, Cheslin Kolbe). The boot of Handre Pollard proved the difference in the match with four conversions and a penalty compared to just two conversions by the All Blacks.

34,182: This was the attendance when the All Blacks and South Africa met at Westpac Stadium in 2018.

?? FLASHBACK! As we build towards this weekend's #NZLvRSA Test, we recall this stunning Brodie Retallick try against @Springboks in 2017!#BACKBLACK pic.twitter.com/pfoTgZISFs— All Blacks (@AllBlacks) July 23, 2019 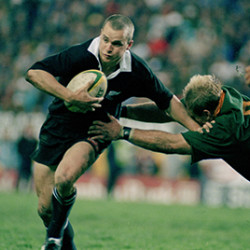