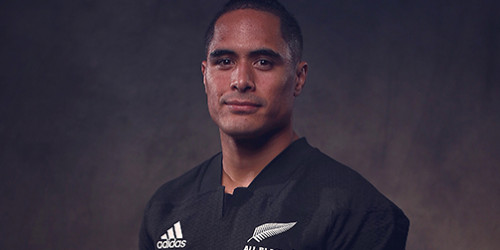 In a major coup for New Zealand Rugby (NZR), the All Blacks most capped number nine and second most capped Highlanders player, halfback Aaron Smith, has put pen to paper – and signed a new two-year deal with NZR and his Super Rugby side.

30-year-old Smith made his All Blacks debut in 2012 and has been a mainstay in the national side ever since, playing 82 Tests to date. He made his Highlanders debut in 2011 and has pulled on the southern team’s Super jersey 129 times.

QUICK TAP: SUPER RUGBY REVIEW - ROUND SEVEN
Smith said he was excited to confirm that his future would be in New Zealand.

"From my earliest playing days, my focus has always been about being passionate about the teams I play for and I’ve always enjoyed giving 100 percent to the teams I represent,” Smith said.

"I love representing the Highlanders and the All Blacks and playing my rugby in New Zealand gives me the chance to continue to do that.

"I'm grateful to NZ Rugby and the Highlanders organisation for all the support they’ve given me over my career and for the opportunities they have provided for myself and Teagan, going forward."

New Zealand Rugby CEO Steve Tew said: “We’re delighted to have re-signed Aaron through to 2021. He’s a proven world-class player, the most capped All Blacks halfback ever and an incredibly important member of the All Blacks and Highlanders.

“New Zealand Rugby has been working incredibly hard on the retention of our key players and, while it’s inevitable that some will move on following the Rugby World Cup, we’ll still have a core of experience in the All Blacks post 2019, and Aaron will be a key part of that group.
“We know all our players have choices to make on where they play their rugby and that the global environment is challenging, but we feel we have got one of the best environments for players here, with outstanding teams and coaches, and so we congratulate Aaron on his decision.”
All Blacks Head Coach Steve Hansen added: “Nuggy has been such an outstanding player for us over many years and deserves every accolade he gets.
“He's a passionate team man, a leader in our team and gives his all to the group. He works incredibly hard on his game and has been incredibly consistent since first coming into the All Blacks. The speed of his delivery from the base of the scrum and ruck is a key point of difference and means we can play the game at real pace, which has suited our game.
“It’s fantastic news that he has committed himself to both New Zealand Rugby and the Highlanders and we congratulate him on his decision.  It’s also timely to congratulate him and his partner Teagan on their recent engagement and the pending birth of their first child.”
Pulse Energy Highlanders Head Coach Aaron Mauger is delighted that Smith has recommitted to the Highlanders for two more years.
“Clearly he has been one of our most influential players, and on the field he’s obviously a big part of the way we like to play the game, so to have the certainty of his services going forward means a great deal to us.’
Highlanders CEO Roger Clark is also excited to get Smith’s signature: “Aaron is one of those once-in-a-generation players who has influenced the way halfbacks play the modern game. His presence over the next few seasons means our next generation of Highlanders will greatly benefit from his experience and ability, which for our organisation is priceless.”
Smith joins a number of established All Blacks who have signed with New Zealand Rugby post 2019, including Dane Coles, Codie Taylor, Joe Moody, Ofa Tuungafasi, Scott Barrett, Sam Cane, Ardie Savea, TJ Perenara, Anton Lienert-Brown, Damian McKenzie and Rieko Ioane, with negotiations progressing with a number of other key players.
Mini bio – Aaron Smith
One of the premier halfbacks of the modern game, Aaron Smith ignites backlines with his bullet-like pass, which is widely regarded as one of the best in world rugby, while is also a strong defensive player. Smith quickly established himself as the All Blacks’ first-choice halfback amidst fierce competition, playing 13 Tests in his debut season in 2012.  He became the most capped All Blacks halfback of all time (overtaking Justin Marshall) in the Test against Ireland in Dublin in November. In 2014 Smith was recognised with the Tom French Memorial Trophy for the Maori Player of the Year for his performances with both the All Blacks and the Highlanders. In 2015 he became an Investec Super Rugby champion with the Highlanders and a RWC champion later in the year. His 129 Highlanders appearances put him second only behind great mate Ben Smith. In 2008, Smith was part of the New Zealand Under 20 side which claimed the Junior World Championship in Wales and in 2010, the Ngati Kahungunu-affiliated Smith made his Maori All Blacks debut. Smith has scored 16 tries for the All Blacks and kicked a conversion against Australia in 2014. 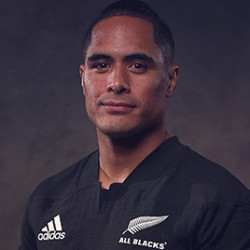