All Blacks aim for quick turnaround Absorbing the lessons of the 9-16 loss to Ireland and driving ahead with their game development would be the All Blacks' goal in Sunday's (NZT) Test with Italy in Rome.

Hooker Dane Coles said it was good to have a chance to right the wrongs associated with their loss to Ireland and while he didn't know the team yet there was a chance for less experienced players in the touring party to be involved in the Italy Test.

QUICK TAP: WORLD CUP WILL BE DIFFERENT FOR IRELAND - BARNES
"I think that sort of result [Ireland] is going to leave a wee bit in the gut over the summer for a couple of months but it's about this week and hopefully we can improve from the weekend," he said.

Coles said the All Blacks had some of the best players in the world who played what they saw in front of them but everything they tried against Ireland there was always someone there.

"We didn't break them down. In the past when we build pressure we can make a line break but they were just everywhere. They played their hearts out. You've got to have structure and you've got to have balance and guys react in situations and sometimes that is going out of your structure and playing what's in front of you. I think we're still trying to find that balance," he said.

"There was some space but we didn't see it and didn't make the right calls. It's about working hard to see what's in front of you and calling the right thing," he said.

Having Ireland being called the best team in the world did hurt but that had been something in the All Blacks' control but they hadn't been able to beat them. That was the nature of sport and Ireland had fully deserved their win.

?? Dane Coles and Ardie Savea run through the weeks preparation as the #AllBlacks look to the last match of the year against Italy. ????????#ITAvNZL pic.twitter.com/S5c1F4k0O5— All Blacks (@AllBlacks) November 19, 2018

"We just have to move on and use that fuel, and that hurt, and channel it the right way," he said.

The loss had been a reminder about ensuring moments in games, when they arrived, were taken. Ireland took theirs and won the game, he said.

Flanker Ardie Savea said he had been feeling sore after such a physical Test but it was a case of getting over it and getting into work for the next week.

"We've just go to focus on the task at hand on Saturday. You get over it pretty quick," he said.

Savea said the gap had closed between the All Blacks and the other top rugby nations but all they could do was focus on each week and to continue to try and improve.

Looking ahead to Italy, he said the players spent a lot of time looking at their opposition. They did their own analysis as well as looking at them as a team. They looked for opportunities to exploit in their opponents and once having determined a plan they then focused on themselves.

Coles said that because they didn't play Italy too often they would spend more time on the computers researching them so there would be no surprises. And it was also about giving Italy the respect they deserve.

"They pushed Australia hard so we'll spend more time on the computers just seeing the way and some trends, and then parking that up and focusing on us," he said.

??? WRAP | How are Italy looking ahead of their clash with the All Blacks? Catch up on the Azzurri's performance against Australia and all the rest of the international action from the weekend. 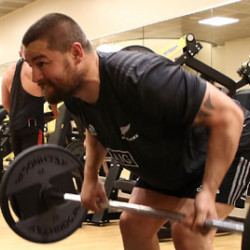