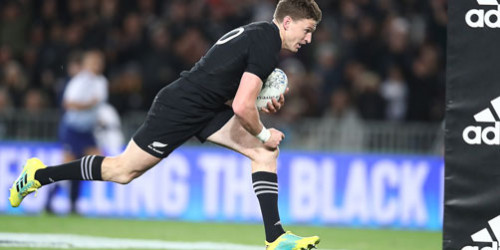 All Blacks playmaker Beauden Barrett unleashed a critic killing performance including four tries and 30 points in their 40–12 win over Australia to retain the Bledisloe Cup at Eden Park on Saturday.

Maligned by some in the wake of rival Richie Mo'unga's play for the Investec Super Rugby winning Crusaders, Barrett answered emphatically as the All Blacks washed over an Australian side unable to offer anything more than seen in their first Test loss in the Investec Rugby Championship in Sydney a week earlier.

QUICK TAP: BLACK FERNS RETAIN LAURIE O'REILLY TROPHY
A possible try in the 66th minute was over-ruled after a TMO check for a knock-on in an Ardie Savea tackle on halfback Will Genia, and another. However, that was of no consequence as two minutes later Barrett was in again, courtesy of a turnover back on the All Blacks' 22 by lock Brodie Retallick which saw replacement Damian McKenzie stretch the defence, feed replacement centre Anton Lienert-Brown with wing Ben Smith in the action before Barrett got the ball at the end of the line.

Three tries in 10 minutes either side of halftime spelled the difference for the All Blacks. There was time for a Genia-inspired break and a break by Bernard Foley to give centre Reece Hodge a try, but that was a rare moment of satisfaction for the visitors who still haven't won at Eden Park since 1986 nor beaten the All Blacks in New Zealand since 2001 with their run of losses standing at 22.

Having gained more scoring impetus just before halftime, the All Blacks started the second half with a flourish, building on runs at the line by fullback Jordie Barrett and flanker Sam Cane before captain and prop Joe Moody drove through to score in the 43rd minute.

Then, after second five-eighths Ngani Laumape made ground when slipping marker Kurtley Beale's tackle to gain ground and set up a chance when a perfect pass from lock Brodie Retallick saw flanker Liam Squire run through to take the All Blacks for a 28-7 lead.

Both sides flung the ball around with effect in the first half but it was New Zealand who struck first, and last. Barrett scored all of New Zealand's first half points, although on the second occasion halfback Aaron Smith may have missed out on the easiest try he might ever score, preferring to ignore the empty spaces on either side of the ruck in order to feed the ball out to Barrett for the try.

The first try came after Ben Smith fielded a high ball with laser-like precision just inside New Zealand's half. On the other side of the field fullback Jordie Barrett created the impetus which allowed wing Waisake Naholo to take ball along the sideline.

70' | TRY! He was denied his fourth try just moments ago but not this time. @beaudenbarrett has four tries for the night as the #AllBlacks go ahead 40-12.#NZLvAUS #BledisloeCup pic.twitter.com/l5aw3FLWhA— All Blacks (@AllBlacks) August 25, 2018

From the breakdown the ball moved back to the midfield where Retallick set up the ruck and from it, Aaron Smith slipped a short ball to Beauden Barrett hitting the line in close and at speed to break it and run in under the posts unopposed. With his conversion he raised 502 points in Tests – the fourth New Zealander past 500 after Dan Carter (1598), Andrew Mehrtens (967) and Grant Fox (645).

Australia enjoyed a sustained period of scrummaging advantage around the middle stages of the half, twice winning penalties in front of the All Blacks' posts and opting for resets. Eventually, Genia took advantage and got over for Australia's response.

Mounting more pressure in the New Zealand 22m area, Australia launched another assault but Beale, who had earlier created a blindside chance which was only halted when wing Marikia Koroibete's in-pass was intercepted by Aaron Smith, knocked the ball on.

With Australia's midfield defence occupied by tight forwards, the Barretts summed the situation up to get the ball wide quickly where Ben Smith and hooker Codie Taylor interpassed with Smith jinking inside and out of Koroibete before centre Jack Goodhue burst toward the line only to be downed just short.

It was at that stage that Aaron Smith opted to pass out to Barrett rather than score himself to give the All Blacks a 14-7 lead at the break.

Considering two tries were also ruled out, it was an outstanding effort by the home team and a poor response by the Australians.

Job done as the #AllBlacks retain the #BledisloeCup and extend their @edenparknz unbeaten streak to 42 Tests.#NZLvAUS pic.twitter.com/SKaS6ECnEL— All Blacks (@AllBlacks) August 25, 2018