All Blacks benefit from forced changes In a perfect world All Blacks lock Sam Whitelock could have expected to play about 30 minutes against Argentina in Nelson on Saturday, instead he ended up playing around 70 minutes.

Whitelock said he had barely sat down when Brodie Retallick had gone down and he had to stand up and prepare to go on much sooner than had been anticipated.

EXCLUSIVE COLUMN: HANSEN WILL BE HAPPY - JIM KAYES
With three players leaving the field around the same time, it had taken the time to settle down and work out what they needed to do and when they did that they had been successful. That was a positive out of the whole experience, he said.

It was the sort of unscripted examination of the All Blacks' processes that could prove invaluable on occasions in the future and from which they should be better prepared to cope next time around.

Whitelock said he still felt fresher than if he had gone through the same preparation as he did when playing.

As a substitute he had to run the expected plays of the opposition and he had enjoyed that aspect of helping the Test team prepare.

While losing players early in a Test was something that was practised occasionally, it had been useful experience for younger players especially, to experience the readjustments that were required and they had got better as the game went on, he said.

It was unfortunate for Brodie Retallick to suffer an injury so soon after returning to the side but it was good for Patrick Tuipulotu. Whitelock noted Tuipulotu had scored three tries in 40 minutes for Auckland in the Mitre 10 Cup so he was looking forward to catching up with him and learning how he did it.

"He's been great when he's been in here before and he's shown that playing for Auckland," he said.
South Africa would present another challenge for the All Blacks locks. They were quality players who had shown their ability in international rugby but also in Super Rugby where they had been leading the way.

Whitelock said Richie Mo'unga had backed himself in his starting debut at first five-eighths and had not been afraid to tell the forwards what to do, something he had done for the Crusaders in recent years.

"Here, in the All Blacks, we need him to do that again and he started that way and it was good to know he had the confidence to say what he wanted and to drive the team around," he said.

It took time to develop the confidence to have a voice, something that had taken Whitelock a while when he joined the side but in his position Mo'unga had to do that straight away.

Whitelock said Argentina had players who could light up a game quickly, and who were good on their feet and were able to cut open the All Blacks' defence on counter attack on a couple of occasions and scored some good tries.

He expected they would be looking to build on their performance to build scoreboard pressure against Australia at the weekend.

The atmosphere was ?? at a sold-out Trafalgar Park in Nelson for #NZLvARG! Don't miss out on your last chance to see the #AllBlacks live in NZ this year when they take on @Springboks in Wellington on September 15. 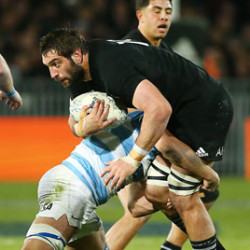