All Blacks depth the envy of the world - Kayes Same ground, similar script.
Last year it was in the first half that the All Blacks destroyed Australia in the opening Bledisloe Cup Test.

This time, after a truly forgettable first half in Sydney, it was a second half blitz that suggests the Bledisloe Cup will remain on New Zealand soil for another year.

QUICK TAP: CAPTAIN'S HAT-TRICK SECURES BLACK FERNS VICTORY
The Wallabies will have to beat the All Blacks at Eden Park this Saturday to have a chance at securing the silverware - a feat they haven’t achieved since 1986.

There was little evidence in the second 40 in Sydney that they are up to the task.

These are desperate times for Australia. On the morning of the Test I caught up Rugby Australia CEO Raelene Castle to talk about the match, her first few months in the job and the importance of winning back the Bledisloe Cup for the first time since they lost it in 2003.

She talked about its value commercially and it’s lure to fans who have turned their backs on the trans-Tasman series.

Those were halcyon years for rugby in Australia and Castle suggests the Wallabies may have over achieved and in the process inflated expectations that are now tough to live up to.

They are certainly struggling to stay in touch with the All Blacks who were just outstanding in the second half on Saturday, with wing Waisake Naholo leading the charge with two tries and a couple of key turnovers.

There are some wonderful options in the All Blacks back three but my favoured trio has always been Naholo, Ben Smith and Rieko Ioane.

Naholo is so quick, very powerful, has a good step, is safe under the highball and on defence, has a good work rate and, most importantly, takes his chances.

Beauden Barrett was also brilliant in the second half as he cast off the shackles and found space and teammates as the All Blacks produced their trademark razzle dazzle rugby.

Damian McKenzie was again superb off the bench and Jack Goodhue showed he is the present and the future at centre.

His midfield partner, Ryan Crotty, received a head knock early in the match and their must now be concerns about his long term health and career.

As slick as the All Blacks backs were in scoring five tries in the second half, it was giant lock Brodie Retallick who produced the dummy of the night as he raced away for his try in his first Test in almost a year.

Retallick was immense in his comeback match and part of a pack that had the Wallaby scrum in all sorts of bother and the lineout in disarray.

The problem for coach Michael Cheika as he takes his side to Waiheke Island to prepare for the second Test in Auckland is that he has little room to move in personnel.

His top 23 is really his top 23; whereas Steve Hansen has depth that is the envy of every other rugby playing nation.

The quality of this All Blacks side is as much reflected in the players who were not in the match day 23 as it is in the performance they produced in the second half.

Cheika’s other issue is that he knows the All Blacks will be disappointed with how they played in that first 40. That frustration will have spurred them on in the second half, but it won’t be sated.

Instead it will be used to keep their feet firmly on the ground as they prepared for the Eden Park rematch.

The Wallabies have to win to keep the Bledisloe Cup on the line for the third test in Japan on October 27.

They must win to breathe life back in to the series for their fans who are staying away in their thousands.

It is unlikely to happen. The All Blacks have had their rusty start, their flat patch and poor performance.

They will be better in Auckland and that prospect does not end well for Castle, Cheika and the Wallabies. 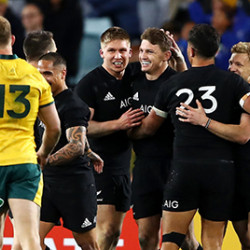