All Blacks have conceded 36 before One of the by-products of last weekend's 36-34 victory by South Africa over the All Blacks was the claim that it was a record-breaking total scored against New Zealand at home.

That may be the case so far as Test matches are concerned but there have been other occasions when the All Blacks have felt the pain of the scoreboard.

QUICK TAP: WAHINE ROUND CAN'T BE A TOKEN MEASURE
In the days before Tests became almost the sole preoccupation of international sides with the advent of professionalism there were first-class games played that for many were regarded as top-class occasions.

As far back as 1932, the All Blacks conceded 36 points, to Wellington. It was a game played at Athletic Park, as often happened, before the team left by ship for an Australian tour.

The game was an after-thought to the tour with a group of officials thinking it might be a good idea to let the team have a run together before heading away. It proved one of the less impressive decisions.

The All Blacks put out their strongest team but they were up against a Wellington side that field six players who had been, or would become, All Blacks. One of them, wing Nelson Ball, known as Kelly, scored four tries in Wellington's 36-23 win.

The only other player to have scored four tries in a game against the All Blacks was 1978 Wallabies flanker Greg Cornelson in Australia's win at Eden Park.

#ONTHISDAY in 2015, the All Blacks kicked off their @rugbyworldcup campaign with a 26-16 win over Argentina after trailing 12-13 at halftime. The two teams are set for another big clash when they meet in Buenos Aires on 30 September in the Investec Rugby Championship. ???????? pic.twitter.com/m5NnF908nu— All Blacks (@AllBlacks) September 19, 2018

What wasn't known at the time of the game was that one of the touring team, George Hart, hadn't been able to play due to a shoulder injury. It had been learned that he would be out of the tour and Ball had been named as his replacement but the selection hadn't been advised to the media. Even more interesting was that Hart travelled with the team at his own expense and ended up playing one game.

Another of the All Blacks, Ray Williams, was injured against Wellington and his place was taken by another of the victorious side, 'Rusty' Page.

Another occasion which went close to matching Wellington's effort was the 35-28 win by the President's XV against the All Blacks at Athletic Park in 1973, the Colin Meads tribute game.

And in that game Sid Going, Tali Kavapalu and Vuniano Varo each scored two tries – the only time that has happened in a game against the All Blacks.

Wellington's 36 points was the highest score by any team against New Zealand until 1992 when Sydney beat the All Blacks 40-17 at Penrith.

If the points scoring in the 1932 and 1973 games had used modern scoring the final scores would have been 52-31 and 41-32 respectively. (Thanks to statistician/historian Paul Neazor for the statistical information).

The countdown is on! There is exactly 1? year to go until @rugbyworldcup kicks off in Japan! 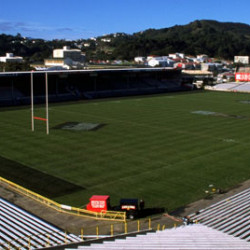