All Blacks in race to reclaim 'unbeatable aura' A serious challenge awaits the All Blacks in 2019 if they are to restore their 'unbeatable aura' in time for the Rugby World Cup in Japan.

That's the view of therugbymagazine.com which believes the All Blacks have been in decline since their shared Test series with the British & Irish Lions in 2017.

QUICK TAP: 19 PLAYERS TO WATCH IN 2019
A 'delayed onset' to the loss of star players like Richie McCaw, Dan Carter, Ma'a Nonu, Conrad Smith and more recently Jerome Kaino, appeared to be the reason for the question marks hanging over the side.

"Arguably, New Zealand were a far greater force to be reckoned with immediately after their cohort of centuries headed for pastures new, both in and out of the game.

"With Joe Schmidt's terrifyingly coordinated Irish side disputing New Zealand's place atop the World Rugby rankings and England's and South Africa's performances against the All Blacks over the last four months, the chasing pack are beginning to sniff Kiwi blood," the magazine said.

"Along with the aforementioned teams, Wales and Scotland have also managed to procure a level of confidence that could yield a tournament upset in Japan, something to rival the host nation's 2015 triumph over Heyneke Meyer's Springboks in Brighton."

While injuries to Owen Franks, Joe Moody, Sam Cane, Brodie Retallick, Sonny Bill Williams, Ryan Crotty, Liam Squire, Nepo Laulala and Kane Hames had affected the continuity of the All Blacks in 2018 there were still question marks in some key areas for the side.

The hole left by blindside flanker and 81-Test veteran Jerome Kaino was still to be resolved with Liam Squire, Vaea Fifita, Shannon Frizell and also Scott Barrett having had time in the position.

???? HANG TIME! We take you back to the opening game of @rugbyworldcup 1991 where the #AllBlacks beat England 18-12. Can you name the players in the air? #MondayMemories pic.twitter.com/g9Ftacn95O— All Blacks (@AllBlacks) January 14, 2019


"It would appear [coach Steve] Hansen is leaning towards a like-for-like replacement in the Highlanders man, Squire, who provides the unforgiving hammer-like role to mimic Kaino's style, whilst flaunting a deceptive turn of pace," it said.

There was also an issue over the placement of Beauden Barrett and Damian McKenzie at first five-eighths and fullback respectively, something which had caused 'genuine uncertainty within New Zealand's backline', it said.

"Shifting one of the best players in the world, Ben Smith, onto the wing to make room for both Barrett and McKenzie in the starting XV has brought a certain level of success, but a number of intercept passes and errors from the latter of the duo have far from secured a dual playmaking axis."

Adding to the conundrum was Richie Mo'unga's emergence and his rise could depend on Barrett and McKenzie ironing out 'remnants of an erratic nature to their game', it said.

The balance in midfield was another issue with five trying to be fitted into two places. Sonny Bill Williams, Jack Goodhue, Ryan Crotty and Anton Lienert-Brown were contesting the places with Ma'a Nonu's return to the Blues a potential wildcard.

"Crotty's poor injury record will have undoubtedly laboured Hansen's decision in the midfield. The Crusader has rarely been permitted the opportunity to make either the 12 or 13 jersey his own, the image of Crotty being assisted to the sidelines by medics seems burned into the retinas," it said. 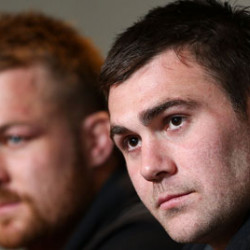