All Blacks rocked by committed Wallabies All eyes turn to Eden Park after Australia scored a stunning 47-26 win in Perth to get one hand on the Bledisloe Cup in a game that ensured the All Blacks will not claim the Investec Rugby Championship for 2019.

But to end their 17-year hiatus without the trans-Tasman trophy they will have to break a losing streak on Eden Park that stretches back to 1986 and where the All Blacks haven't lost since 1994.

QUICK TAP: CLASSY BLACK FERNS TOO GOOD FOR WALLAROOS
If sides wanted these pre-World Cup games to be an exercise in preparation, the All Blacks were left with plenty to think about as Australia ran amok through 80 minutes.

Some long held frustrations were released in what was a 15-man effort to achieve their highest score against New Zealand.

Special contributions were made by hard-running second five-eighths Samu Kerevi, halfback Nic White, wing Marika Koroibete who turned up all over the field, big locks Izack Rodda and Rory Arnold who were as adept in off-loading as midfield backs, while hooker Tolu Latu, and props Scott Sio and Alan Alaalatoa were punishing in the defensive screen.

The All Blacks had to contest the second half with 14 men when during the final stages of the first half and a prolonged Australian assault on the New Zealand line, lock Scott Barrett was ruled to have completed a dangerous shoulder charge to the head of Australian captain Michael Hooper and referee Jerome Garces felt the offence was severe enough to warrant a red card.

Only the fourth All Black to be sent off, Barrett entered the history books alongside Cyril Brownlie (1925), Colin Meads (1967) and Sonny Bill Williams (2017).

Australia started at an intense rate, tying up the ball during the first 10 minutes and working from side to side, with the odd snipe around rucks by White.

But it was from a near intercept by second five-eighths Anton Lienert-Brown, who was unable to grasp the ball, and it was tidied by centre James O'Connor on the left flank. He got a ball away when going to ground to wing Reece Hodge and he as presented with clear space on a 45m run to the line in the ninth minute, three minutes after first five-eighths Christian Lealiifano landed a penalty goal.

New Zealand finally got their hands on the ball and moved it with impressive speed and continuity and when centre Jack Goodhue was on the end of the line, he kicked ahead with Read looking in perfect position, only to be bustled out of the contest by Hooper but he couldn't control the bouncing ball, and while Lienert-Brown missed at his first attempt he was able to ground the ball for the try in the 12th minute.

A midfield turnover was quickly moved by the All Blacks and Aaron Smith found Barrett running hard onto the ball at first receiver and he sped ahead to link with hooker Dane Coles, wing Rieko Ioane and halfback Smith. Coles provided the first thrust, linked with Smith who then put Ioane in for the second try four minutes later.

And at fulltime it was little better. The All Blacks made 180 tackles to 112 while missed tackles were 37-27 and Australia dominated the rucks and mauls winning 143-70.

Congratulations Australia, you were the better team tonight. We look forward to the rematch at Eden Park next week.#AUSvNZL #BACKBLACK ?????? pic.twitter.com/NsXcFqORew— All Blacks (@AllBlacks) August 10, 2019

The impact of Barrett's loss was obvious early in the second half when ball held up in the goalmouth and from the resulting scrum, Australia were able to work the ball through nine phases before White fed the ball on the short side to lock Rory Arnold who battled to control the ball before slipping it to flanker Lukhan Salakaia-Loto who scored.

Then from the restart Australia moved the ball to the left where wing Marika Koroibete beat off two tackle attempts before finding the ever-present White inside to score a second try in three minutes.

However, ushering on their substitutes, New Zealand mounted a prolonged assault in the Australian 22m area which saw prop Angus Ta'avao taking ball forward several times and as Mo'unga and Barrett worked their way as first receivers, it was finally their combination which allowed Barrett to work his way over the line in the 55th minute.

A penalty allowed Australia to regain possession and they worked the ball into the 22 again with another prolonged series of pick-and-goes before Koroibete did what the big forwards couldn't and picked the ball out of the back of the ruck to score.

Beale launched a counter assault from his own 22 with Koroibete featuring again, and while an apparent Hooper knock-on resulted in a lineout to Australia and they used it with Will Genia injected to up the ante and more outstanding setup work provided Hodge with his second try of the night.

But from the restart replacement second five-eighths Ngane Laumape chased the ball, gathered it and had a clear run to the goalline to pull the score back to 40-26.

The game was finally pushed to Australia's advantage when Beale scored the last of six tries moments from the end. 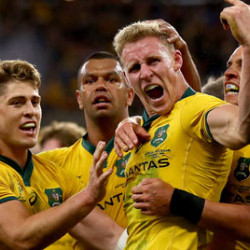