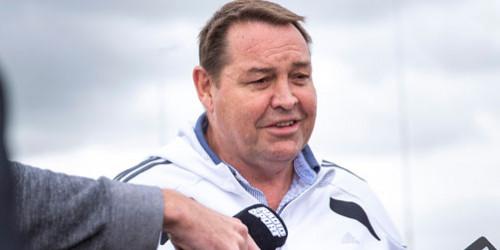 All Blacks coach Steve Hansen ruled out the prospect of flankers Ardie Savea and Sam Cane playing at six and seven during the Investec Rugby Championship but he didn't rule them out of playing seven and eight.

Hansen was speaking at the All Blacks' Foundation day in Christchurch, mainly for South Island players.

TOURNAMENT PREVIEW: WORLD RUGBY UNDER 20 CHAMPIONSHIPS
He had been impressed with the way Chiefs captain Cane, who only recently resumed playing after suffering a broken neck last year, had hit the ground running.

What that showed, he said, was the value of having a proper pre-season.

"He's had an extended one obviously but getting that 14-16 weeks allows him to come back in in great shape both physically and mentally. He's hungry and playing well because of it," he said.

Being at the business end of the Investec Super Rugby season, the selectors were watching the last stages closely and while they had their thoughts they were not yet committed to the final look of their squad due to the role that injuries might yet play.

"Every World Cup year we get the same amount of people injured, the key thing is how many long-term ones have we got and at the moment we've only got one permanent one and that's Damian [McKenzie], fingers crossed we don't get any more," he said.

Hansen said flanker Liam Squire had been excused from the day due to his lack of play and as he was likely to be in the Highlanders 23 to play the Bulls it was felt better to let him concentrate on that.

Midfield back Sonny Bill Williams was not far from playing again, he was training fully, and it would be a Blues decision when he returned.

Prop Owen Franks was likely to play in the next fortnight, lock Brodie Retallick should be back for the last round of Super Rugby while hooker Codie Taylor would be ready for the quarterfinals.

The likes of Franks and Retallick especially, among the big men, would lack match fitness through not having played.

"Both of them are very experienced, we've seen Sam Cane out for a long time come back and he's playing outstandingly well so they know what's required. You're not going to not pick them so you've just got to use the Rugby Championship to get them right and this year the Rugby Championship is not the main prize.

"The main prize is the Rugby World Cup and followed very closely by the Bledisloe, so we've just got to use the games that we've got wisely, " he said.

There were still areas of choice the selectors had to make in relation especially to their options in the middle row of the pack and the midfield in the backline.

With Scott Barrett having played so well on the side of the scrum there would be thought on whether he might be an option in that role at the World Cup or whether he might be one of three locks taken with other considerations for the loose forwards.

The selectors saw his longer career as a lock but against teams who fielded bigger players in the loose, Barrett was able to play that role. He had been outstanding on the side of the scrum against England last year and earlier at Albany when the All Blacks thumped the Springboks 57-0.

Hansen said midfield was another area they had to get right.

"We've got players there who are all capable of playing good Test football and we can only take four of them. Getting the overall selection right at the World Cup is hugely important because you can only take 31," he said.

That was why the Rugby Championship and Bledisloe Cup were so important.

"There's no point us panicking about who we're going to take or making definitive decisions right now because injuries will come into it and then you think you've got four or five of them [players] and all of a sudden you've only got two.

"We'll just take our time…and then it's a case of making the tough decisions when the time comes," he said.

With the @cricketworldcup underway in England, we've taken a look at all the best players from past and present to select the ultimate Cricket XV!