All Blacks Sevens bolstered by new and experienced signings The All Blacks Sevens will have the services of one of their most well known and experienced players through to the Tokyo Olympics, with Kurt Baker locking in his commitment through to 2020.

Baker is one of five players that have today announced their All Blacks Sevens contracts, alongside 2018 breakthrough players Akuila Rokolisoa and Ngarohi McGarvey-Black.

QUICK TAP: TOP TALENT GETS NOD FOR RED BULL IGNITE7
New players joining the All Blacks Sevens are New Zealand Under 20 and Northland outside back Scott Gregory and national champions St Peters 1st XV captain Niko Jones, who captured the attention of the rugby public with a stand-out performance as he led his team to their first National 1st XV title.

All Blacks Sevens Coach Clark Laidlaw said it was great to have five more players locked in as the season approaches.

“This season is important for us because it’s an Olympic qualification year. We need to be performing at every tournament we go to, so it is crucial to have a strong squad.

“Kurt has come back into this team and thrived. Not only is he playing some of his best rugby, off the field he is a real leader in this team and it’s hugely exciting knowing that he will be with us for the next two seasons,” he said.

Rokolisoa, McGarvey Black, Gregory and Jones have all signed contracts for the upcoming 2018/2019 World Series.

?? Catch up with our #AllBlacks7s and #BlackFerns7s stars as they chat about the 2019 NZ Sevens in Hamilton, will you be there to see our World Cup champs in action? ?? pic.twitter.com/GboP6DIWH4— All Blacks Sevens (@AllBlacks7s) November 12, 2018

“Akuila and Ngarohi both came into our environment earlier this year and have been hugely impressive. Ngarohi’s season was cut short with injury but we saw the potential he has in the three tournaments he played. Akuila joined the team as injury cover from the development squad and impressed right from the outset, he was involved in both our Commonwealth Games and World Cup victories.”

Newcomers Scott Gregory and Niko Jones are the latest of New Zealand’s emerging rugby talent to choose the sevens pathway.

“This year was a perfect example with Etene Nanai-Seturo and Salesi Rayasi playing a year of sevens before picking up Investec Super Rugby contracts. Scott and Niko are outstanding young athletes and its exciting to see what they might be able to achieve in this form of the game.

“Our job is to develop these young men on and off the field; both have big futures ahead of them,” said Laidlaw.

The All Blacks Sevens have just returned from the Oceania Sevens, finishing second after a dramatic extra-time Final loss against Fiji, They depart for the opening tournament of the HSBC World Series in Dubai next week.

?? Keen to know how the #redbullignite7 programme is shaping up? Check out the type of equipment that will be used during the @redbull Ignite7 match day in a couple of weeks. ??#roadtoignite7 pic.twitter.com/ngiAD58Trh— All Blacks Sevens (@AllBlacks7s) November 11, 2018 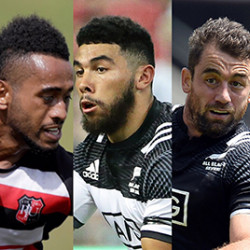