All Blacks Sevens primed for last hit out of the season All Blacks Sevens Coach Clark Laidlaw has named his final team for the 2018/19 HSBC World Rugby Sevens Series event in Paris this weekend.

SOUNDS OF THE SEVENS ?? "We’re all from different parts of the world so when we sing, we sing together and we’re all one" - #AllBlacks7s coach Clark Laidlaw#Paris7s pic.twitter.com/ZpSKV8jUSz— All Blacks Sevens (@AllBlacks7s) May 29, 2019

There are two changes to the squad that finished fifth in London last weekend. Kurt Baker sustained a foot injury and has been replaced by Ngarohi McGarvey-Black while Scott Gregory has been released to join the New Zealand Under 20 side in Argentina and is replaced by Amanaki Nicole.
Laidlaw said the focus this week has been on recovery and review.
“We were frustrated losing the quarterfinal last weekend, I thought we bounced back well against South Africa and Ireland to finish the tournament, but we are here to win. Since arriving in France the focus has been on getting bodies and minds recovered and in our reviews we have found areas we want to replicate in our game and areas we need to improve.”

UPDATE | Scott Gregory has been released to the New Zealand Under 20s, with Amanaki Nicole coming in as replacement.

Laidlaw paid credit to Curry ahead of his 50th tournament.
“It’s a huge achievement, to lead and play the way he does is a huge credit to him and his family. The way he conducts himself makes him an awesome ambassador for the team on and off the field.”
The All Blacks Sevens will face Scotland, Japan and France on Day One.
“Playing France at home is something to look forward too, we’ve had a couple of tight games against them, so we’re excited about play them at night in their home stadium,” said Laidlaw.
Schedule (dates and times in NZT)
Day One – Saturday 1st / Sunday 2nd June
11.12pm v Scotland
2.38am v Japan
6.26am v France
Day Two – Sunday 2nd / Monday 3rd June
Finals
Broadcast
Watch the HSBC London Sevens on Sky Sport pop up channel 2

One last push before our final tournament of the season ????#Paris7s pic.twitter.com/E4VutwriPM— All Blacks Sevens (@AllBlacks7s) May 30, 2019 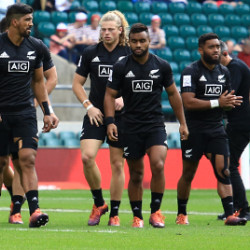