With @nzmusicmonth kicking off today, we ask the #AllBlacks7s for their Kiwi picks ??

Scott Gregory and Vilimoni Koroi return from injury to bolster the travelling squad, while Sam Dickson, Trael Joass and Niko Jones are currently sidelined.
A six week break since the last tournament has seen the All Blacks Sevens squad have a chance to refresh.
“It’s felt like a mini pre season in a way. We had a couple of weeks away from each other and everyone came back quite excited. We have had a look at our game and reflected where we are at and there is a desire to finish the season with quality performances,” said Laidlaw.
At the past two tournaments the All Blacks Sevens suffered quarterfinal defeats, but Laidlaw said that’s no reason to panic.
“You need a huge amount of perspective when you lose. There are a couple of areas of the game we want to improve but at the same time there are a lot of things that have been going really well.” 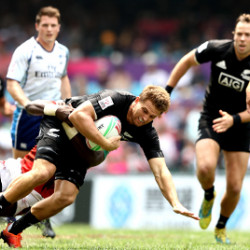