The All Blacks Sevens team will be looking to kick 2019 off in style when they take the field in Hamilton next weekend at the HSBC New Zealand Sevens.

After a horror run of injuries at the end of last year, Coach Clark Laidlaw has an almost fully fit squad to select from.
Kurt Baker - Manawatu
Dylan Collier - Waikato
Scott Curry (c) - Bay of Plenty
Sam Dickson - Canterbury
Scott Gregory - Northland
Andrew Knewstubb - Horowhenua Kapiti
Vilimoni Koroi - Otago
Tim Mikkelson (c) - Waikato
Sione Molia - Counties Manukau
Jona Nareki - Otago
Amanaki Nicole - Canterbury
Joe Ravouvou - Auckland
Tone Ng Shiu - Tasman
Regan Ware - Taranaki
Laidlaw said the team has come into the New Year refreshed and there has been an edge at training as they build towards the Hamilton event.
“Obviously we picked up some injuries through Dubai and Cape Town so to have those guys back fit, healthy and available for selection for a home tournament is encouraging.
QUICK TAP: KARL TE NANA'S ULTIMATE ALL BLACKS SEVENS TEAM
“We’re as close to full strength as you can get and we’re really excited about putting that squad on the field. There are a few guys that haven’t played much rugby since the World Cup so we need to train right and get into day one well prepared and hopefully build through the tournament as we go,” said Laidlaw.
Co-captain Tim Mikkelson returns to play at his home stadium after missing the opening two legs of the Series due to the birth of his first child.
Joe Ravouvou is also set to don the black jersey for the first time since his blockbusting World Cup campaign last July, having gained New Zealand citizenship to make him eligible for the World Series.

? Time is running out to book your spot at the 2019 #nzsevens. Tickets are still available, don't miss out! ??

Laidlaw said with only the one home tournament a year, the All Blacks Sevens want to make an impression on their fans.
“We’re expecting a huge crowd and home support. It’s something we’re really excited about, playing at home with that expectation – it’s something we want to embrace,” said Laidlaw.
The team will travel to Hamilton on Monday to prepare for the tournament.
MEET THE ALL BLACKS SEVENS AND BLACK FERNS SEVENS:
DATE: Tuesday 22nd January
TIME: 9am - 11am
PLACE: Garden Place, Hamilton

If you're in Hamilton on Tuesday the 22nd, come down to Garden Place and meet some of the team for a free BBQ, a signature and a photo or two! ?? ?? pic.twitter.com/FNd9JXSUnT— All Blacks Sevens (@AllBlacks7s) January 14, 2019 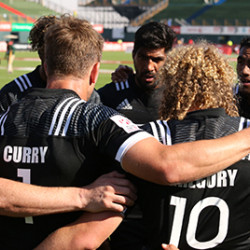