The All Blacks Sevens team to play the sixth leg of the 2016/17 HSBC World Series in Vancouver, starting Sunday New Zealand time, has been named.
Captain Scott Curry returns to the team after sitting out the Las Vegas tournament last week as a precaution due to a mild concussion.
Ambrose Curtis, who was called into the team as injury cover has been named in the starting 12 after impressing off the bench in Las Vegas. Andrew Knewstubb moves down to 13 and Tone Ng Shiu is travelling reserve for the tournament.
Listen below to hear coach Scott Waldrom preview the tournament.

The team is:Scott Curry – Captain (Bay of Plenty)Dylan Collier (Southland)Ambrose Curtis (Manawatu)DJ Forbes – (Counties Manukau)Iopu Iopu-Aso (Taranaki)Trael Joass (Tasman)Vilimoni Koroi (Otago)Tim Mikkelson (Waikato)Sione Molia (Counties Manukau)Sherwin Stowers (Counties Manukau)Isaac Te Tamaki (Waikato)Beaudein Waaka (Taranaki)
Thirteenth player:Andrew Knewstubb (Tasman)
Travelling reserve: Tone Ng Shiu (Tasman)
“It’s great that Scott has fully recovered from his concussion and is all clear to start this weekend. His leadership, aerial skills and speed up front will be welcomed back,” said All Blacks Sevens Head Coach Scott Waldrom.
“Ambrose has earned his spot in the starting 12. He brings experience from previously playing for the All Blacks Sevens and his recent time with the Blues is a good addition to the team.
“I’m looking for the team to step up and play with improved discipline. Again in Las Vegas we showed glimpses of the squad we can be, but we let ourselves down in the games that mattered with simple errors. To move past the semifinals and take out a tournament we need to play without mistakes in every game.
“We go into the tournament keen to make our first final of this series. We are first up against Russia who are improving, Scotland is only a couple of places behind us on the overall series standing and have shown the they can win against the top teams, and Canada will be keen to impress at home and bring a hometown advantage. So we are going to have to work hard on day one to earn our spot on finals day.”
Schedule for All Blacks Sevens pool play (NZT)
Sunday 12 March 20179.04am NZT v Russia12.40pm NZT v Scotland4.20pm NZT v Canada
Monday 13 March 2017Finals Day
Information on World Rugby HSBC Las Vegas World Sevens Series Tournament 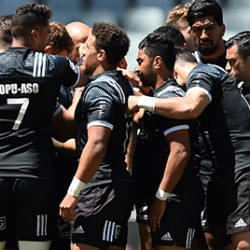