New Zealand's All Blacks Sevens finished third overall in the HSBC 2018-19 World Series when beaten 24–35 by Fiji in the final of the Paris tournament on Sunday.

Fiji's win gave them 186 points in the series while the United States, who led for much of the season, finished second with 177 points and New Zealand were on 162 points, 14 ahead of fourth-placed South Africa.

QUICK TAP: THE ULTIMATE CRICKET XVIt was the first time the New Zealand and Fiji had met in a final in Paris, and their 27th final in Sevens Series history. They are the two most successful sides in the event each having won four Sevens series titles.

With temperatures during the day touching 30 degrees Fiji opened the scoring in the final after 30 seconds when Napolioni Bolaca was on hand to take a pass from Sevuloni Mocenacagi after his darting run to score. That was followed soon after by another try, to Meli Derenalagi. Then, in the fourth minute Aminiasi Tuimaba scored.

Jona Nareki got one back for New Zealand but it was a high mountain to climb when going to halftime 7-28 down.

Jerry Tuwai opened the second half scoring before Bolaca crossed again. Fiji lost Derenalagi to the sin-bin for a deliberate knockdown which allowed New Zealand to start to claw back some of the margin. Regan Ware and Dylan Collier scored within a minute of each other to be followed by another to Ware before the game ended.

That's a wrap! The #AllBlacks7s finish the season third overall on the @worldrugby7s Series and with that, book their place in the 2020 @Olympics

Thank you to everyone for all your support throughout the year ??????#Paris7s pic.twitter.com/xctjmsdCeh— All Blacks Sevens (@AllBlacks7s) June 2, 2019

New Zealand went into the second day without Vilimoni Koroi and Joe Ravouvou due to injuries. They beat Argentina 21-12 in their quarterfinal.

That left New Zealand facing South Africa in their semifinal. The All Blacks Sevens were too strong in claiming a 33-7 win. Ware scored the side's first two tries in the second and sixth minutes with Nareki scoring before the break as New Zealand took a 21-0 lead to the turn.

Cecil Africa got one back for South Africa but New Zealand finished strong with Andrew Knewstubb and Amanaki Nicole scoring.

Fiji secured their place in the final by beating the United States 33-14.

Knewstubb finished the season as the series' highest points scorer with 307 points.

With 307 points on the 2018/19 @WorldRugby7s Series, Andrew Knewstubb finishes as the highest points scorer for the season ??#Paris7s pic.twitter.com/Ljd04M11dY— All Blacks Sevens (@AllBlacks7s) June 2, 2019 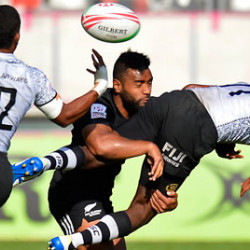