The All Blacks Sevens have celebrated co-captain Scott Curry’s 50th tournament for the side by going unbeaten on day one in Paris.

The Clark Laidlaw coached side were tested throughout the day but deservedly topped the pool and will face Argentina in a quarterfinal on day two at 10.12pm NZT.

QUICK TAP: CHIEFS STUN THE CRUSADERS IN SUVA
The All Blacks Sevens started the day with a victory over Scotland but it didn’t come easy. After opening the scoring through Regan Ware in the fourth minute, the All Blacks Sevens struggled to gain possession as Scotland controlled the pace of the game to take a 7-12 lead with two minutes to play. Jona Nareki was the hero for New Zealand with a try in the 12th minute to snatch a 14-12 win.

Next up on day two were a plucky Japan side who were better than the 31-14 score line suggests. Japan went into the break leading 14-7 after rocking New Zealand with two well-worked tries. It was all New Zealand in the second half though with Jona Nareki excelling with two tries and a number of influential touches.

New Zealand rounded out the day with a clash against hosts France. The hosts struck with tries early and late in the contest but New Zealand controlled the middle stages to win 17-10.

ICYMI ?? We pay tribute to #AllBlacks7s co-captain @sc0ttcurry who notches up an incredible milestone this weekend - 50 tournaments on the @worldrugby7s Series ??#Paris7s pic.twitter.com/AR9TAyGL20— All Blacks Sevens (@AllBlacks7s) June 1, 2019

Elsewhere on day one, Fiji continued their hot form from London last week by taking out England 52-14, Argentina 40-26 and Ireland 40-5.
They are two points clear of USA at the top of the standings who also topped their pool to set up an intriguing final day in Paris.

The final set of Cup quarterfinals this season will see hosts France take on Fiji while the USA will face Kenya. The other two knockout clashes will be between New Zealand and Argentina, while South Africa will take on Samoa. 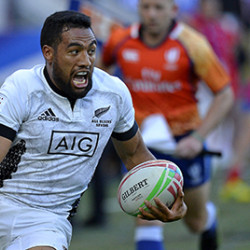