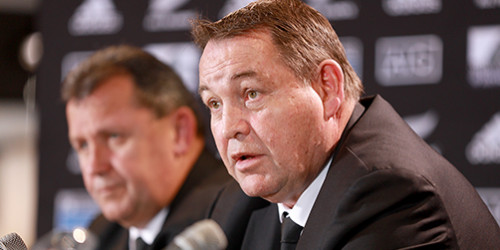 AllBlacks.
com contributor Jim Kayes takes a look at the first All Blacks squad of 2019 named for the first two matches of the Investec Rugby Championship.

One was first and the other third to last as the comeback kids almost book ended the All Blacks squad named for the Tests against Argentina and South Africa.

Asafo Aumua didn’t have to wait long to realise he was back in the All Blacks after two appearances off the bench in games on the end of year tour in 2017.

QUICK TAP: MATCH OFFICIALS CONFIRMED FOR SUPER RUGBY FINAL
But Brad Weber had to wait for 35 more names to be read out before his return after four years in the wilderness was confirmed, the predictable Sam Whitelock and Sonny Bill Williams the only names after him.

Weber played in the warm up match against Samoa in 2015 but wasn’t needed for the World Cup as Tawera Kerr Barlow returned from injury.

So that was it - 17 minutes off the bench in Apia’s sweltering heat.

But a stunning season with the Chiefs has seen Weber brought in from the cold, moving ahead of Te Toiroa Tahuriorangi as the All Blacks third halfback.

It really was an easy decision for the All Blacks selectors given Weber had started ahead of him all season at the Chiefs and had played so well.

Assistant coach Ian Foster praised Weber’s leadership at the Chiefs in a season where captains Sam Cane and Brodie Retallick were missing for most of it with injuries.

At the other end of the alphabet, Aumua returns after an initial call up that was heralded as the start of a long career in black.

It lasted one trip to Europe. Aumua went in the Hurricanes 2018 preseason unfit and overweight and was seldom seen that year, but he has worked his way back, leapfrogging Nathan Harris to be one of four hookers in the initial squad.

He’s probably ranked fourth behind Liam Coltman but will likely travel to Argentina as Codie Taylor could be one of the Crusaders left at home.

Aumua may not have set the world on fire with the Hurricanes this year, but his potential is huge and he is a big man who the All Blacks fancy will be useful in shifting bodies and busting holes.

"He lost his way a little bit early on after being taken away as an apprentice,” Hansen said of the 22-year-old.

“But he's come back, he's fit, and he's a superb athlete. He's still got a bit of work to do on his throw but he's getting better at that too, as well as his scrummaging which is not the finished thing either."

The 39-strong squad that will be trimmed to 34 for the Bledisloe Cup tests against Australia, contains four new faces and reflects Super Rugby form as well as some, like Williams, picked because the coaches know what they can do.

Ryan Crotty’s injury means the midfield remains a bit of a mystery but is also a chance for Ngani Laumape to show he can’t be left behind when the squad heads to the World Cup.

Ditto for Patrick Tuipulotu who, with Scott Barrett also out injured, will need to convince the selectors to take four locks to Japan, not three.
The excitement in this squad comes from some of the new faces.

Josh Ioane and Luke Jacobson may be short-term All Blacks for now, but show there is talent coming through at first five and blindside flanker.

Jacobson was helped by Liam Squire ruling himself out but the former New Zealand under 20s captain has a big future in the All Blacks.

Ioane will probably travel to Argentina as Richie Mo’unga seems set to get a break after the Super Rugby final and while that could be his lot this year, we now know who the next cab off the rank is.

And with Beauden Barrett expected to take a break next year his return to the All Blacks could be rapid.

Braydon Ennor and Sevu Reece - who Hansen dubbed a pocket rocket - along with George Bridge who got a cap and two tries against Japan last year, show there is plenty of talent out wide.

It also suggests Ben Smith will be used primarily at fullback, though Hansen wouldn’t be drawn on that, or on who will captain the team against Argentina and pack down at No.8 as he did confirme Read won’t make the trip.

Smith is the likely captain and Ardie Savea should start at No.8.