The All Blacks selectors, Steve Hansen, Ian Foster and Grant Fox, have named their squad for this year's Investec Rugby Championship.

The 33-strong squad is as follows (with age, Super Rugby club, province and Test caps):

Halfbacks
TJ Perenara (26, Hurricanes / Wellington, 45)Aaron Smith (29, Highlanders / Manawatu, 74)Te Toiroa Tahuriorangi (23, Chiefs / Taranaki, uncapped)   First five-eighths
Beauden Barrett (27, Hurricanes / Taranaki, 65)Damian McKenzie (23, Chiefs / Waikato, 15)Richie Mo'unga (24, Crusaders / Canterbury, 1)   Midfielders
Ryan Crotty (29, Crusaders / Canterbury, 37)Jack Goodhue (23, Crusaders / Northland, 1)Anton Lienert-Brown (23, Chiefs / Waikato, 24)Sonny Bill Williams (33, Blues / Counties Manukau, 46)   Outside backs
Jordie Barrett (21, Hurricanes / Taranaki, 5)Rieko Ioane (21, Blues / Auckland, 16)Nehe Milner-Skudder (27, Hurricanes / Manawatu, 11)Waisake Naholo (27, Highlanders /Taranaki, 19)Ben Smith (32, Highlanders /Otago, 67)     As well as the 33-man squad, two other players will assemble with the squad as injury cover. Hooker Liam Coltman comes in as cover for Dane Coles, who is expected to return to Test match rugby some time during the Investec Rugby Championship, while midfielder Ngani Laumape comes in for Sonny Bill Williams, who is recovering from a shoulder injury.
The squad also features two uncapped players. Crusaders and Tasman prop Tim Perry, who played two non-Tests on last year's Vista Northern Tour, was named in this year's Steinlager Series squad but missed the series with injury, while young Chiefs and Taranaki halfback Te Toiroa Tahuriorangi has also been selected.
Another feature of the squad is the return of number eight and Captain Kieran Read, who missed the Steinlager Series through injury, while lock Brodie Retallick also returns to the side after 11 months away from Test rugby.
Players Kane Hames, Nepo Laulala, Atu Moli and Jordan Taufua were not considered for selection due to injury.
All Blacks Head Coach Steve Hansen said: "The selectors found this an incredibly difficult squad to select, and whilst we congratulate those who've been named in the Investec Rugby Championship team, we also commiserate with those who've missed out.
"It has to be noted that there are some very good players who have not made the squad.  However, as we've seen in previous campaigns, a number of these players will get an opportunity through injury, just like Liam and Ngani already."
Hansen added: "One of the positives of having such a talented pool to select from is that it creates natural competition, not only for spots in the Rugby Championship squad, but also the matchday 23. That competition should remove any feelings of complacency within our playing group."
Hansen said the squad was keen to build on the hard work put in during the successful three-Test Series against the French in June.
"Whilst last year was about growing depth - and we'll need to continue to do that in some positions - this year is more about growing our game and our player combinations within that.  By the end of the year, we should have a clearer picture of who and what will be needed for next year's Rugby World Cup campaign."

Not #FakeNews...@CNN takes a close look at what makes the #AllBlacks so successful.

While there was always a need to have an eye on the future, Hansen said the team also had to deal with the here and now.
"We'll face quality opposition throughout the Championship. Both Australia and South Africa appear to have grown their games and will come at us with real energy and conviction, while the Argentinians have a new coaching group, which will present new challenges.
"All of this means that this year's Investec Rugby Championship will be a well-contested competition and we'll need to once again raise the bar across the board when it comes to our preparation, our skill levels and how we handle pressure. Being comfortable is not an option."
Hansen said the immediate goal was to "recapture the Bledisloe Cup.""After the Rugby World Cup, this is the most important trophy we play for.  We lost to Australia the last time we played them, so no doubt they'll have a lot of self-confidence and are worthy of starting  as favourites."
Hansen said the squad was looking forward to the support from fans around the world, but particularly the fans at home for the domestic Tests in Auckland, Wellington and a first-ever Test in Nelson.
Squad breakdown
The All Blacks squad is made up of 18 forwards (three hookers, five props, three locks and seven loose forwards) and 15 backs (three halfbacks, three first five-eighths, four midfielders and five outside backs) and has a total of 1078 Test caps experience.
The squad is made up of three Blues players, seven Chiefs, six Hurricanes, 10 Crusaders and seven Highlanders while 13 of New Zealand's Mitre 10 Cup provinces are represented, with seven Canterbury players, five from Taranaki, three each from Wellington, Manawatu and Tasman, Auckland, Counties Manukau, Waikato and Bay of Plenty have two players each while there is one player from Northland, North Harbour, Hawke's Bay and Otago.
The All Blacks squad will assemble in Christchurch on Thursday this week with the team taking on the Canterbury and Otago provincial sides in the Game of Three Halves match at AMI Stadium on Friday night. A squad of 32 will head to Sydney on Sunday to prepare for the first Bledisloe Cup Test.

GAME OF 3 HALVES! The @AllBlacks are coming to Christchurch for a 'Game of Three halves' against Canterbury and Otago on August 10. Come down and support your local and national teams! 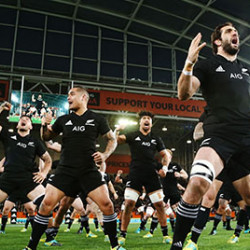