A mixture of world-class experience and exciting younger talent are the features of the All Blacks squad named today by selectors Steve Hansen, Ian Foster and Grant Fox for the three-Test Steinlager Series against France.

The squad is as follows: (with age, Investec Super Rugby club, province and Test caps. New All Blacks are in bold.)

Outside backs
Jordie Barrett (21, Hurricanes / Taranaki, 2)
Rieko Ioane (21, Blues / Auckland, 13)
Nehe Milner-Skudder (27, Hurricanes / Manawatu, 11)
Waisake Naholo (27, Highlanders /Taranaki, 18)
Ben Smith (30, Highlanders /Otago, 64) - Vice-captain
The key feature in the Steinlager Series squad is the selection of three new All Blacks: Highlanders and Tasman loose forward Shannon Frizell, Crusaders and Tasman loose forward Jordan Taufua and Chiefs and Taranaki halfback Te Toiroa Tahuriorangi.
Also selected are Crusaders teammates Tim Perry, Richie Mo'unga and Jack Goodhue, who played non-Test matches on last year's Vista Northern Tour and are yet to make their Test debuts.
Meanwhile, making a welcome return to the All Blacks are 95-Test cap prop Owen Franks and Hurricanes outside back Nehe Milner-Skudder who both missed the back half of last year's All Blacks season through injury.
As well as the 33-man squad, two other players will assemble with the squad. Highlanders hooker Liam Coltman, will come in as paternity cover for Nathan Harris, whose partner is expecting a baby during the Steinlager Series; while Blues loose forward Akira Ioane will assemble as well, with the All Blacks selectors wanting to take the opportunity to continue his development at international level.
With Kieran Read injured, the All Blacks selectors have named 96-Test lock Sam Whitelock as Captain for the Steinlager Series, with fullback Ben Smith and loose forward Sam Cane named as Vice-captains. Whitelock has captained the team once before, against Wales in the last Test of 2017.
As well as Read, other players not considered for selection due to injury were Asafo Aumua, Dane Coles, Kane Hames, Nepo Laulala, Atu Moli, Patrick Tuipulotu and Israel Dagg.

New Zealand Rugby Trading Cards are here! ?? Keep your eyes peeled for the limited edition and signature cards (1 in every 90 packs!).

All Blacks Head Coach Steve Hansen said: "Firstly, on behalf of the selectors, All Blacks management and New Zealand Rugby, I'd like to congratulate all those players selected for the Steinlager Series, especially the three new All Blacks. It's always a very special time being selected for the All Blacks for the first time and the players and their families can be justifiably proud of all the hard work they have done to reach this point.
"It was a really tough squad to select, more so because there are some very talented players who have missed out, but I'm sure they will get their opportunity in the black jersey in the near future."
Hansen also congratulated Whitelock on his appointment as Captain for the Series.
"He's one half of the best locking combination in the world and one of the best players on and off the park. He has a cool head under pressure and the support of the players and management.
"In saying that, we're blessed with a number of other leaders in our group and the expectations are that they'll continue to lead both on and off the park in their actions, and in doing so make Sam's job that little bit easier."
In setting the scene for the All Blacks season, Hansen said: "2018 will be about consolidation for us.
"We'll look to continue to grow our player depth and expose more players to our environment and Test rugby, help them improve and enhance their game fundamentals, and in doing so, create consistent, ingrained habits that will hold up under the greatest of pressures, which is Test rugby."
Hansen described the French as "always a dangerous side.
"Whilst they're at the end of their season, many of their players haven't played a lot of rugby through injury, so they'll be a lot fresher than they'd normally be, for this campaign. Our preparation will need to be both smart and bone-deep if we're to combat this French team, who'll come with a strong belief and commitment. As history tells us, we'd be very foolish and naïve to underestimate their abilities."

SNEAK PEEK! Grab some ?? and check out the first glimpse of the ground-breaking @PrimeVideo series: All or Nothing: New Zealand All Blacks.

The squad is made up of three Blues players, six Chiefs, eight Hurricanes, 10 Crusaders and six Highlanders, while 12 of New Zealand's provinces are represented with seven Canterbury players, five from Taranaki, four from Wellington and Tasman, three from Manawatu, two each from Auckland, Waikato and Bay of Plenty, and one player from Counties Manukau, Hawke's Bay, Northland and Otago.
The All Blacks squad will assemble in Auckland until Tuesday and in Christchurch from Sunday 27 May - Tuesday 29 May, before assembling in Auckland on Sunday 3 June to prepare for the first Test.
The new All Blacks - mini biographies
Shannon Frizell is blessed with dynamic rugby skills, which were on full display this year when he scored three tries in the Highlanders win over the Blues in round ten of the Investec Super Rugby season. Standing tall at 195cm, the 24-year-old Tongan-born loose forward moved to Nelson after signing a development contract with the Tasman Rugby Union in 2015. He represented New Zealand Marist at Under 19 level and also played for the Tasman sevens team. He made his provincial debut for Tasman in 2016 playing in all matches, and after a blockbuster 2017 Mako season earned a Super Rugby contract with the Highlanders.
Outstanding, young Rotorua-born halfback Te Toiroa Tahuriorangi played club rugby in New Plymouth in 2014-15 and consistently impressive performances saw him selected for the New Zealand U20s in 2015, where they won the World Rugby Junior World Championship. Later that year he was selected as part of a strong NZ Barbarians team that won 34-17 against the Maori All Blacks. A member of the Ngati Pikiao iwi, Tahuriorangi then went on to debut for the Maori All Blacks in 2017 against the British and Irish Lions. The 23 year old made his Investec Super Rugby debut for the Hurricanes in 2016 and made ten appearances before moving to the Chiefs in 2018.
Jordan Taufua has continued to make his mark as an outstanding loose forward with the Crusaders so far in 2018. Born in Auckland, 26-year-old Taufua moved to Christchurch where he attended Lincoln University and played local club rugby. He debuted for Tasman in 2012 on loan from Canterbury before rejoining Canterbury for their ITM Cup Premiership success in 2013. He then moved back north for the 2014 season with Counties Manukau, starting every game in his first season with the Pukekohe-based side, before returning to Tasman for the 2017 season. A dual international at U20 level, Taufua played for Samoa at the 2011 Junior World Championship before returning to New Zealand in 2012.

All Blacks vs France - rivalry
The All Blacks and France have a rivalry which extends back to 1906. They have played 58 times, with the All Blacks winning 45 times and the French 12. The most recent Test match was the 38-18 win to the All Blacks in Paris on last year's Vista Northern Tour. France have visited New Zealand 12 times (excluding RWCs), with the last tour in 2013.

Tickets to the Steinlager Series Tests are still available from www.allblacks.com/tickets. 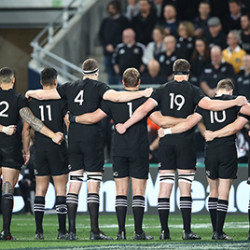