All Blacks squad to Argentina and South Africa named All Blacks Head Coach Steve Hansen said: “We always had a plan to manage Kieran’s long-haul travel this year, following his return to rugby after back surgery, so he’ll miss the trip to Argentina and re-join the squad in South Africa for the Test against the Springboks.”

QUICK TAP: ONE YEAR TO GO UNTIL RUGBY WORLD CUP 2019 KICKS OFF
Loose forward Vaea Fifita will travel with the All Blacks to Argentina in his place and return to New Zealand following the Test against the Pumas. Midfielder Ngani Laumape, who was called in as injury cover earlier in the Investec Rugby Championship, will also stay in New Zealand. Dane Coles, Joe Moody, Brodie Retallick and Liam Squire will also stay to continue their injury rehabilitation programmes.

The All Blacks squad for Argentina and South Africa is:

NEWS | Rieko and Akira Ioane have both re-committed to New Zealand Rugby until 2022 and 2021 respectively. Who's excited to see these two brothers stay on home soil? ?????? 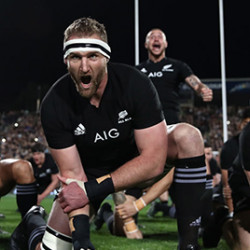