All Blacks still No.1 for Boks coach Erasmus Springboks coach Rassie Erasmus isn't reading too much into the situation the All Blacks find themselves in a month out from the opening of the Rugby World Cup.

Having suffered a record loss to Australia 26-47 last weekend didn't change the fact the All Blacks would go into the tournament as favourites, he told supersport.co.za.

"They are still No.1 in the world and they have been No.1 for a long time.

"I think every time the All Blacks look to struggle a bit around 12 months before a World Cup, and they take a dip. But if you look at who has the most World Cups – then it shows how they get out of that dip at the right time.

"I am not reading much into where they currently are. If you take the last four games between us and them, there was two points in it each time, and they've won the World Cup when they want to," he said.

Rather than writing the All Blacks off, Erasmus said they would always pose the greatest threat and be South Africa's greatest rugby rival.

"They are very clever in what they are doing and currently they are trying a few combinations. If you take the team they sent to Argentina, it was a bunch of rookies that made the trip. There was a bunch of guys who were thrown together with not many Test caps between them. They still grinded [sic] that game out and won 20-16.

"I thought they were a bit lucky there, but they got the win. I think they use the time well to try and plan things and they will peak at the right time in the World Cup in terms of using the right combinations.

"What happened this past weekend was a bit of a setback, but I believe they are really astute in picking the right time to peak as a team. I don't think there is an All Black team that doesn't go through a drip before a World Cup," he said.

Meanwhile, former Springbok loose forward Schalk Burger said he believed South Africa had gained the most on the All Blacks through their consistency in selection with many of their first-string players being veterans of the 2015 World Cup.

"The one reservation I had before this year – we always knew we could beat any side in the world – but was whether we could do it three weeks in a row because that's what you need when you get to the playoffs in a World Cup," he said.

"It's high pressure and you need to deliver quality no matter what the opposition. The last three weeks have shown that we've got it," he said. 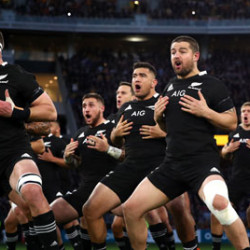