The All Blacks selectors have named the team to play France in the third and final Steinlager Series Test at Forsyth Barr Stadium, Dunedin, on Saturday 23 June.
The matchday 23 is as follows (with Test caps in brackets. New Test All Blacks are in bold):

The key feature is the selection of new All Blacks Shannon Frizell in the number six jersey and Jackson Hemopo on the bench.

QUICK TAP: PLAYERS AND COACHES UNITED IN THIRD TEST APPROACH
The tight five is unchanged, with Samuel Whitelock again named as captain.
In other forward changes, Ardie Savea gets his fourth start in the number seven jersey, while Matt Todd will provide additional impact off the bench. Liam Coltman, who made his Test debut in 2016, comes in as the reserve hooker, while Karl Tu'inukuafe and Ofa Tuungafasi will again provide front row power from the bench.
In the backs, Damian McKenzie gets his first Test start in the number 10 jersey outside halfback Aaron Smith. Midfielder Jack Goodhue, who played against the France XV on last year's Northern Tour, will make his Test debut at centre, outside Sonny Bill Williams, who has made a remarkable return from injury. The back three have been reshuffled, with Waisake Naholo coming in on the right wing, Ben Smith at fullback and Rieko Ioane on the left wing.

TJ Perenara is reserve halfback, Richie Mo'unga, who also played the non-Test against the France XV last year, looks set to make his Test debut off the bench, while Jordie Barrett is the other back reserve.

All Blacks Head Coach Steve Hansen said: "One of the aims of the Steinlager Series was to continue to build depth across our squad and give players opportunities. Now that we have secured the Dave Gallaher trophy and won the Series, we think this is the right time to do that. It's an exciting mix of players with big-match experience, newer All Blacks who are continuing to grow their game, and four players who have been named in the Test 23 for the first time. On behalf of the All Blacks, I want to congratulate Shannon, Jackson, Jack and Richie, on their selection in the Test side.
"Our focus this week has been concentrating, firstly, on getting our individual processes done well, and then working on these collectively as a team. Another key focus has been our mental preparation, which needs to be bone deep and genuine.
"The French have proven to be a worthy opponent and very difficult to play, and we see this Test as another opportunity to improve our game.
"Once again we are looking forward to playing under the roof at Forsyth Barr Stadium in guaranteed good conditions."
The new All Blacks - mini bios
Shannon Frizell is blessed with dynamic rugby skills, which were on full display this year when he scored three tries in the Highlanders win over the Blues in round ten of Investec Super Rugby. Standing tall at 1.95m, the 24-year-old Tongan-born loose forward moved to Nelson after signing a development contract with the Tasman Rugby Union in 2015. He represented New Zealand Marist at Under 19 level and also played for the Tasman sevens team. He made his provincial debut for Tasman in 2016 playing in all matches, and after a blockbuster 2017 Mako season earned a Super Rugby contract with the Highlanders.
24-year-old lock / loose forward Jackson Hemopo has gone from strength to strength since making his debut for the Highlanders in 2015 during their championship-winning season. Standing 1.93m and 108 kg, Hemopo was selected for the Maori All Blacks for their Northern Tour last year on the back of a very impressive provincial season with Manawatu. Showing his ability to step up to international rugby, Hemopo had already impressed with his outstanding form for the Highlanders in their historic victory against the British & Irish Lions. Hemopo was a member of the 2013 New Zealand Under 20 side, and played for Otago in 2013-2015 before signing a deal to return to Manawatu in 2016 where he has continued to develop ever since.

?? "We weren't satisfied with the result" All Blacks Assistant Coach Ian Foster says the #AllBlacks are ready to finish the #SteinlagerSeries on a high against France.

?? WATCH | Wellington man Dave Newman won the chance to see the All Blacks play anywhere in the world, but nobody expected him to do this... #TeamAllBlacks #AllBlacks pic.twitter.com/3Zrkl8DKZ9— All Blacks (@AllBlacks) June 20, 2018 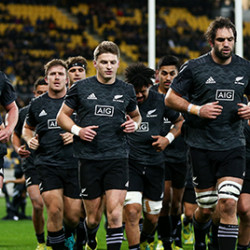