All Blacks turn tables on Australia with emphatic win Australia's failure to score says it all about the All Blacks' response to their record loss a week earlier when they emphatically turned the tables en route to a 36–0 Bledisloe Cup win at Eden Park on Saturday.

Steadfast in application, resolute on the tackle and utterly committed to denying every chance possible, the All Blacks turned on their power to rebuff the Wallabies' efforts to end 16 years of Bledisloe Cup misery on the occasion of coach Steve Hansen's 100th Test at the helm of the side.

QUICK TAP: BLACK FERNS SWEEP WALLAROOS IN AUCKLAND
It was the first time since 2012, also at Eden Park, Australia had been held scoreless in Bledisloe Cup games.

The All Blacks' transformation was dynamic, borne of patience during the first quarter and then quietly taking advantage of the loss to Australian confidence and while the score might have been expected to blow out in the second half, the substitutes' bench was given time to perform.

Tighthead prop Nepo Laulala demonstrated why the selectors had put faith in him by applying the pressure through the scrum and even when they packed a seven-man scrum late in the first half, the All Blacks had the ability to drive the Wallabies back. He also ran hard with the ball in hand.

Lock Sam Whitelock had the pressure applied from management and responded while hooker Dane Coles was to the fore in the tackles on the wider fringes.

Flankers Ardie Savea and Sam Cane contested the breakdowns and supported captain Kieran Read in the defensive department and the Australians could only reflect on the way passes that stuck a week earlier were knocked loose in the face of outstanding defence this time around.

And they repeated the dose in the first scrum of the second half, after a wrong call appeared to have been made by referee Jaco Peyper when an Australian player played at the restart before it had bounced over the 10m line.

Starting with defence which allowed few of the startling drives with the ball in hand that were so effective for the Wallabies in Perth, the All Blacks made their efforts count and while they got into strife with head high tackles towards the end of the half, they were dominant enough to deny the Australians all but one possible try scoring chance.

When the breakthrough came, in the 28th minute, it was through a tackle made by wing George Bridge on fullback Kurtley Beale that resulted in his pass going behind wing Reece Hodge. He failed to control the ball and Mo'unga was on it quickly to run 40 metres to score.

Fullback Beauden Barrett had all the time in the world to size up his options. He chose to put his speed to use, running hard towards the left wing where he fed Bridge into space. He made ground down the sideline, stretching the defence, and then finding halfback Aaron Smith in field for the pass and the All Blacks' second try.

Hooker Dane Coles had got involved in a scuffle after a superb breakdown win by flanker Sam Cane which resulted in a penalty. Coles was warned to keep out of others' business, but from the lineout that followed, which saw the All Blacks turn on the power in their drive towards the Australian line, he infringed with a high tackle, off the ball on halfback Nic White, who spent much of the game seemingly in a one-man conference with the referee.

New Zealand had been awarded a penalty from the drive, but it was over-turned after a video assessment and Coles was sin-binned.

Returned to full strength the All Blacks set a scrum in front of the posts with Savea packing at No.8. He ran wide and fed inside to Kieran Read.

From the ruck the ball was moved for second five-eighths Sonny Bill Williams to charge at the line with momentum allowing him to score in the 45th minute.

With the changes made, it was the 66th minute before the All Blacks scored again, the result of replacement fullback Jordie Barrett's kick through, which wing Sevu Reece kicked on and then won the race for the touch down.

Three minutes from the end it was Savea's turnover in the Australia 22 that created the chance for Bridge to score to give the All Blacks their 36-0 margin.

This is what it means to the lads. #NZLvAUS #BACKBLACK pic.twitter.com/X8jv5EZOsf— All Blacks (@AllBlacks) August 17, 2019 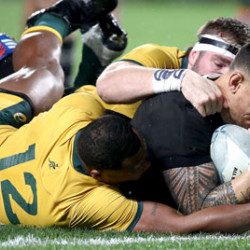