adidas and New Zealand Rugby (NZR) have paid homage to both Maori and Japanese cultures, with the unveiling today of a stunning new All Blacks jersey for Rugby World Cup 2019.
Designed by Y-3, the collaboration label between adidas and legendary Japanese designer Yohji Yamamoto, the jersey was launched at a breakfast event in Auckland on Monday 1 July.
EXCLUSIVE COLUMN: PLENTY FOR ALL BLACKS SELECTORS TO PONDER - KAYES
Yohji Yamamoto, who is world renowned for his striking, avant-garde designs, said: "We wanted to create a jersey that brought together the Japanese and Maori cultures. The design bears hand-drawn koru and fern motifs in a celebration of Maori culture. It has been a privilege to work on such a major project and I wish the team the best of luck in the tournament."
New Zealand Rugby's Kaihautu (Maori Advisor) Luke Crawford, who gave adidas advice on Maori design, said: "The fern design represents the legacy of those players who have worn the jersey in the past, while the unfurling koru represents the younger players coming through - the All Blacks of the future. I think Y-3 have really captured the mauri (essence) of what the All Blacks jersey stands for and how it represents us, and created a truly beautiful garment."
Taking on the innovative design of the most recent All Blacks jersey, the key technological elements of the RWC2019 design include the use of seamless, woven technology. The jersey's construction was fully automated which aims to provide an unparalleled fit, strength and speed, and is 25 percent lighter than previous designs.
As with previous Rugby World Cup jerseys, the RWC trophy is embossed on the right sleeve acknowledging the All Blacks' Rugby World Cup successes in 1987, 2011 and 2015. The RWC2019 logo is on the right of the chest, which sees the adidas badge move to the centre of the jersey. The All Blacks silver fern logo remains on the left-hand side of the jersey, while the all black collar returns for the Rugby World Cup.

All Blacks Captain Kieran Read said: "We're all really excited ahead of the Rugby World Cup in Japan. It's always special pulling on the All Blacks jersey, and to wear one that has used our culture to inspire the design will be especially cool. On behalf of the team, I want to thank the Y-3 team for all their work on the jersey."
The fusing of Maori and Japanese design aesthetics also extends to the design of the training jersey the All Blacks will wear at Rugby World Cup 2019. Taking inspiration from the Maori concept of kaitiaki (guardianship) and the Japanese fuku neko (lucky cat), the Y-3 team has designed a mythical cat figure which will adorn the back of the training jersey. The training range also includes a performance tee, performance singlet, polo shirt and hoodie.
The replica jersey, as well as the training range and supporters gear, will be available for fans to purchase from 1 July, including the All Blacks RWC2019 singlet (NZ$70), performance tee (NZ$80), polo shirt ($NZ90), replica RWC jersey ($110 youth size, $150 adult) and RWC high-performance jersey (NZ$200) . The range will be stocked at all adidas stores, major sporting goods retailers, rugby retailers throughout New Zealand and the world, and online at www.adidas.com
The All Blacks RWC2019 jersey - key points
* Designed by Y-3, the collaboration label between adidas and legendary Japanese designer Yohji Yamamoto, the jersey is a fusion of Japanese and Maori design elements.
* The design bears hand-drawn koru and fern motifs in a celebration of Maori culture.
* The All Blacks will wear the jersey for the first time in their opening match of RWC2019 against South Africa on 21 September.
* Replica jerseys and the training range will be available to fans in New Zealand and globally from 1 July
About Y-3 and Yohji Yamamoto
Y-3 brings sport-style to the street. Fuelled by the innovations of adidas and expressed in the style of Yohji Yamamoto, Y-3 creates progressive apparel, footwear, and accessories-a vision driven by both the sports icon and the renowned designer.
Founded in 2002, Y-3 established the category of fashion sportswear-one that it continues to redefine. Seventeen years later, Y-3's signature style combines engineered garments and intensive performance with Yamamoto's singular elegance and strong tailoring. The result is a modern uniform of the streets - designed in Japanese and German ateliers and intended for the world.
Yohji Yamamoto is one of the most influential creators of the past 40 years with respect to traditional clothing codes and his intellectual approach to design. He knew how to preserve his independence in the fashion industry, which allowed him to express himself freely in his uncompromising creations and collaborations with the same spirit. 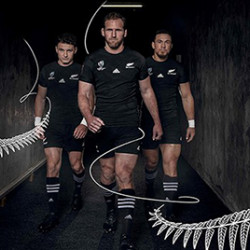 View all
Players rewarded with New Zealand Barbarians squad selection
The New Zealand Barbarian Rugby Club has today announced the 2021 New Zealand Barbarians squad that will assemble in Taupō this week.
Do not write off the All Blacks – Brad Shields
Former Hurricanes loose forward Brad Shields' has given northern hemisphere critics a warning not to write the All Blacks off ahead of the 2023 Rugby World Cup.
All Blacks trainer smashes Wattbike world record
He has an incredibly sore butt and has to lie down, but he’s just smashed a world record.
“I was lost for words” – Moorby on Hurricanes call-up
Southland fullback Josh Moorby is looking forward to the rich outside back resource base the Hurricanes have as he prepares for his first Super Rugby Pacific season in 2022.
Bailyn Sullivan looks forward to fresh start with the Hurricanes
Drawn to playing for the side he followed growing up, centre Bailyn Sullivan is looking forward to Super Rugby Pacific with the Hurricanes in 2022.
Pacific nations rejoice at eligibility rule change
A landmark change to World Rugby’s eligibility laws has opened the door for some of the world’s top players to return to Test rugby for the country of their birth.
Whitelock, Gill and Mooar eye world record cycling attempt for charity
All Black Captain Sam Whitelock, Head trainer Nic Gill and Assistant Coach Brad Mooar are set to ride bikes for 24 hours to raise money for Bowel Cancer Prevention – with Gill eyeing a potential world record.
Leon MacDonald no stranger to Segner’s talent
Blues coach Leon MacDonald called on personal experience when signing German-born Tasman flanker Anton Segner to his squad for Super Rugby Pacific in 2022.
"We want to win the full season title” – Leon Macdonald
Ending a drought of competition success by claiming the Super Rugby Trans-Tasman competition last year was only part of the Blues' revival, and they have their eyes on higher goals.
Dupont reflects on childhood dream to play the All Blacks
Speaking to France's rugby newspaper Midi Olympique, captain and halfback Antoine Dupont said he still can’t believe what the side has achieved against the All Blacks in Paris.
All Blacks break 100 tries in a single season
The All Blacks have become the first team in Test rugby history to score 100 tries in a single season.
Coles concedes physicality needs to be better
France and Ireland rammed home just how much the rest of the rugby world has caught up on the All Blacks.
Foster to mull over slow starts against Ireland and France
Occupying the minds of the All Blacks' think tank over the next few months will be working out why they started so slowly in their last two Tests, the losses to Ireland and France.
Super Rugby Pacific 2022 squads announced
Returning star power, some familiar faces from the past join a cast of exciting young rookies in New Zealand's five 2022 Super Rugby Pacific squads announced today.
Strong French start proved too much to overcome – Foster
Conceding two early lineout maul tries, shook the All Blacks from their intended formula, and their halftime points deficit of 6-24 was finally too much to come back from in their 25-40 defeat by France in Paris on Sunday (NZT).
France claim Dave Gallaher Trophy in Paris
France combined flair and resistance to secure the Dave Gallaher Trophy with a 40-25 win over the All Blacks in Paris on Sunday (NZT).
Black Ferns better but still fall short against France
The Black Ferns have turned in their best performance of the northern tour, but still fell 29-7 to France in Castres to close out this campaign.
Waikato and Taranaki crowned Bunnings NPC champions
Waikato capped their centennial season by claiming their third Bunnings National Provincial Championship Premiership title by beating Tasman 23-20 in Hamilton on Saturday night.
Dave Gallaher Trophy on the line, with All Blacks to wear white
Extra spice for the All Blacks' Test with France, in Paris on Sunday (NZT), will be provided by defending the Dave Gallaher Trophy with the side sporting a commemorative poppy on their jersey that, due to the clash of colours, will be a white jersey.
PREVIEW: Black Ferns v France (Castres)
The Black Ferns will be looking to finish their Northern Tour on a high this weekend, taking on France in their second Test in Castres.