Fan voting is now open to decide who takes the hooker position in the All Blacks All-time Rugby World Cup XV.
We have analysed every All Blacks Rugby World Cup campaign from 1987-2015 to select four players in each position, now it is up to the fans to select the final team.
Who will you select as your hooker? The finalists are:
Sean Fitzpatrick (1987, 1991, 1995) A veteran of three Rugby World Cup tournaments, Sean Fitzpatrick was at the top of his game for over a decade. In 1987, Fitzy’s mobile-running and pace around the park assisted the All Blacks fast-paced game plan. By the time of the 1995 World Cup in South Africa, ‘Fitzy’ had morphed into a wily veteran and inspirational leader. He led the All Blacks through to the final where they lost to South Africa 15-12 in a dramatic extra-time encounter.
Andrew Hore (2007, 2011) Despite playing in the same era as great All Blacks hookers Keven Mealamu and Anton Oliver, Andrew Hore made a big impact on the Rugby World Cup stage. Playing in 11 matches across the 2007 and 2011 tournaments, Hore showed his ability with ball in hand by crossing for three tries and appearing from the bench in the tense 8-7 final win over France in 2011.
Keven Mealamu (2003, 2007, 2011, 2015) Keven Mealamu played in four Rugby World Cups throughout his career, with 20 World Cup matches to his name. Mealamu is the most capped All Blacks hooker with 132 caps to his name. The two-time Rugby World Cup champion was always a fan favourite and showed strong leadership qualities throughout both victorious World Cup campaigns. Mealamu’s last test match was the 2015 Rugby World Cup final against Australia in London.
Dane Coles (2015) In 2015, Coles cemented his place as the All Blacks first choice hooker and started in the Rugby World Cup final victory over Australia. Coles played in six out of the seven 2015 World Cup matches for the All Blacks and scored one try in the tournament, his five pointer came against Georgia in the pool stages.
VOTE BELOW: 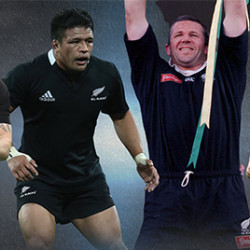