Auckland shoot back to top of Mitre 10 Cup Auckland returns to the top of the Mitre 10 Cup Premiership standings – and retains the Fred Lucas Memorial Trophy – after a 29-24 win in windy Wellington.

A three-try burst in 13 minutes during the second stanza helped guide Auckland home, but the visitors were under the knuckle in the first hour of the clash before the five-pointers to captain TJ Faiane, Salesi Rayasi and Jordan Trainor sunk a sagging Lions outfit.

Auckland was flat on attack and unable to secure field position until centre Tumua Manu ran a good angle to score his fifth try of the season after a Melani Nanai thrust.

The Lions then twice thwarted Auckland tryscoring opportunities. Malo Tuitama and Matt Proctor both held up Rayasi over the line after he sprinted 50m from an intercept. Akira Ioane, who had a torrid battle with his Lions counterpart Teariki Ben-Nicholas, lost the ball over the line in a Taufale tackle.

The home side was sitting pretty after two early second spell strikes. Ben-Nicholas ran a hole and offloaded to second five Thomas Umaga-Jensen for the score, while Ben Lam crossed out wide off a long Garden-Bachop ball. The Lions were 24-10 to the good, while Auckland could not eliminate its errors.

But suddenly, as if on cue, Faiane scored a try out of nothing from a Dalton Papali’i turnover. The Auckland No 12 showed nifty footwork and then bolted 40m for the try. When Mateaki Kafatolu was binned for a dangerous tackle on Evan Olmstead, Auckland sensed an opening. There was more sting in the tackle, and that led to more points.

FT | @AucklandRugby have jumped back in the winning circle with a close win over @WgtnRugby in the capital. #WELvAKL #Ours pic.twitter.com/iOYSjQct6s— Mitre 10 Cup (@Mitre10Cup) October 4, 2018 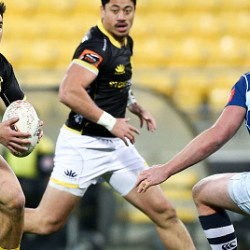