'Beautiful to watch, a joy to play in' - Guscott 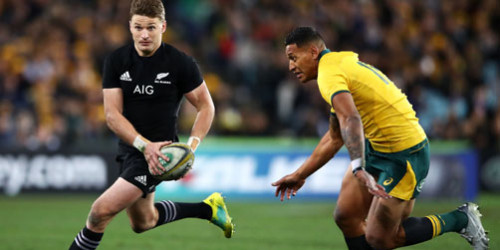 Former British & Irish Lion and England second five-eighths Jeremy Guscott said the All Blacks were playing 'a beautiful game to watch that must be a joy to play in'.

Writing in The Rugby Paper, Guscott said of New Zealand's Bledisloe Cup/Investec Rugby Championship 38-13 win in Sydney on Saturday: "People are told when they play the All Blacks 'expect the unexpected'; but the reality is that it is not unexpected in the way the Fijians can be from behind their own goal line, or the wonderful French team in the late 80s early 90s. With this All Blacks side you pretty much know what's coming – their players, their gameplan, it's nothing new, just executed superbly.

QUICK TAP: ALL BLACKS DEPTH THE ENVY OF THE WORLD - KAYES
"Intensity and intelligence describes the All Blacks game for me and they were ruthless either side of halftime – but I was still amazed how quickly Australia fell off.

"They've been together such a long time and know their opposition so well – they play New Zealand a lot – that it was embarrassing for them in the second half. You'd expect your set-piece to be tight but the lineout was second rate junior rugby standard in accuracy and execution," he said.

Guscott said Australia's problems, especially in tackle success was a mix of poor technique and execution. There wasn't a great difference in the tackles made. It was just that New Zealand had 90 per cent success.

"You don't win the Bledisloe Cup just winning one"

Steve Hansen says there's plenty of work to do ahead of the second #BledisloeCup Test in Auckland this weekend.

Of the All Blacks, Guscott said: "[Jack] Goodhue might be the least well known but you can just tell he will be a solid, consistent player in the nothing flash Conrad Smith mode.

"[Beauden] Barrett, who has been under pressure from Richie Mo'unga, produced a commanding performance, and Aaron Smith directed it all brilliantly as usual. [Waisake] Naholo was lucky not to get carded in the first half but boy he's a work of art with a rugby ball in his hands. He's spectacular with a wonderful step at pace and when you think there's Rieko Ioane as well, it's a very special backline indeed," he said.

There was no sign that Kieran Read had barely played all season while [Sam] Whitelock and [Brodie] Retallick were formidable.

Australia would need to find another gear at Eden Park at the weekend and they should nail any opportunities they receive.

"They are very well drilled but they look tired and unable to flick the switch and up tempo. It's not as if possession or territory was overwhelming. It comes down to fitness and I don't understand the disparity there between Tier One sides. They are all professional with the time to condition themselves, but other teams' fitness levels are still so inferior to New Zealand.

"If Australia cut out their errors, sort out the tackling and raise the intensity, they could get close to the All Blacks in Eden Park next week – but they won't beat them," he said.

Vote for your favourite play from the #AllBlacks v @qantaswallabies match and you'll go in the draw to win tickets to the second #DoubleHeader at Eden Park on the 25th of August. 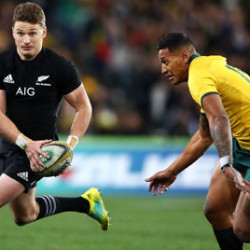