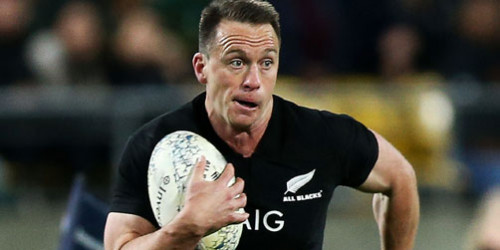 All Blacks and Highlanders outside back Ben Smith has confirmed that he will be leaving New Zealand Rugby at the end of the 2019 season.
32-year-old Smith, who has played 76 Tests for the All Blacks and 144 games for the Highlanders, has signed a contract with French club Pau and will leave New Zealand following what is expected to be his swansong, at the Rugby World Cup in Japan.
QUICK TAP: THE ALL BLACKS YEAR IN NUMBERS
"I'm excited about the opportunities that may present themselves in the future, but I also realise that my playing time with Otago, the Highlanders and the All Blacks now has an end point," Smith said.
"In your heart you want to play forever, but in your head you know that's not possible. In the playing time I have remaining, I'm pretty keen to experience a fresh, new challenge. I think it will be good to be involved in a new environment and a foreign culture for a while, I'm sure it will be a bit of an adventure for both myself and my family.
"Dunedin will always be where I call home and I'm one short of playing my 50th game for the 'Grizzlies' so I still have a little unfinished business here yet."
New Zealand Rugby CEO Steve Tew has paid tribute to Smith.
"Ben has been an incredibly loyal servant of the game and we look forward to enjoying the 2019 season with him. On behalf of New Zealand Rugby, I want to thank him for everything he has done for game. The way he plays is an inspiration to New Zealanders and fans around the world - Green Island, Dunedin and New Zealand can be incredibly proud of him."
All Blacks Head Coach Steve Hansen added: "Ben will leave New Zealand with the very best wishes of everyone involved in the All Blacks. He's a special person and an outstanding rugby player who has always given - and will continue to give - 100 percent to the All Blacks jersey.
"He has been a key member of the All Blacks leadership group for many years and captained the team against Samoa last year. We'll get to thank Ben, his wife Katie and his family personally for his contribution to New Zealand Rugby next year, when the All Blacks season resumes, but for now we want to congratulate him on everything he has achieved."
Pulse Energy Highlanders CEO Roger Clark said that Smith was the epitome of what the Highlanders club stood for.
"Ben Smith is a true Highlander man, he has been since the day he walked into the club 10 years ago. No matter where in the world he plays, he always will be a Highlander. As a club we recognise how fortunate we are to have had his playing ability and personal influence in our club for so long; his name and deeds will always be synonymous with what is best about the Highlanders. His service to the club has been outstanding and we wish Ben and his family all the very best in the future."
Head Coach Aaron Mauger said: "As a coach you always want your best players around, but no one can deny that 'Bender' has earned the right to end his playing career on his own terms; doing what's best for him, Katie, Annabelle and Walter. It's an exciting time in any player's career playing in a foreign country and in a new environment. I know the team will be looking forward to playing one last season with him."

STATCHAT | The All Blacks scored more points than any other tier one nation in 2018. ??