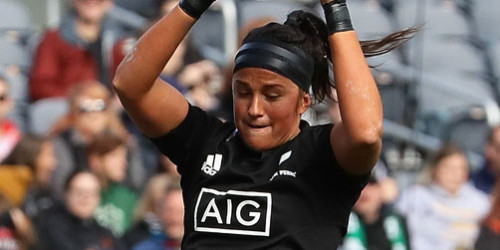 New Zealand's Black Ferns got the workout they needed when beating Canada 35-20 in their opening game of the Women's Rugby Super Series in San Diego on Saturday.

Being their first Test match of the season there was some rustiness about the world champions and Canada worked them hard throughout. New Zealand's experienced core of blindside flanker Charmaine McMenamin, second five-eighths Chelsea Alley and halfback Kendra Cocksedge were each prominent in denying the Canadians more impact.

QUICK TAP: BLACK FERNS SUPER SERIES GUIDE
They needed to as Canada wing Elissa Alarie was outstanding every time she touched the ball, scoring one try and going close to another. However, lineout throwing issues in the breeze in the second half reduced Canada's opportunities and it was the New Zealanders who finished stronger.

The Black Ferns looked to attack from the outset and it was only faulty handling and passing that prevented their scoring their first try before the ninth minute. When they did score it was on the back of good work by the forwards who built from a lineout drive to pressure the line and after prop Aleisha-Pearl Nelson drove at the line, it was lock Eloise Blackwell who picked the ball up and scored.

Canada made good use of a midfield tighthead to move the ball downfield with fullback Irene Patrinos making good ground to set up a ruck. When the ball was moved left, No.8 Gabrielle Senft made a telling break into space and then fed the ball to Alarie who cut back on a perfect angle to take the cover defence out of action and run in to score beneath the posts.

Into the second quarter, the New Zealanders attempted to up the tempo and fullback Selica Winiata and right wing Renee Wickliffe combined to take the ball down the right flank. The ball was moved left from the ruck where the outstanding figure of the first half blindside McMenamin broke into a gap to take play to Canada's line.

Quick ball from the ruck saw Alley move the ball on to wing Carla Hohepa to score out wide. Cocksedge added a fine wide conversion and added two penalty goals before the break, in response to two landed by her opposite Brianna Miller.

Starting the second half strongly, the Black Ferns missed an early opportunity from a lineout close to the line but in subsequent play they built off an incorrect throw by the Canadians to work a scrum move with debutant No.8 Pia Tapsell feeding Cocksedge.

The halfback ran across field to feed a reverse pass to Alley. Running a good angle she was into space to score in the 44th minute. It was reward for good work done late in the first half by Alley who made some strong breaks.

Canada came back, initially after Black Ferns first five-eighths Ruahei Demant kick to the line was run back out from Canada's line after Alley was taken out of play in attempting to follow through, but the match officials made no call.

Patrinos ran the ball out and with quick support, the Canadians worked their way back downfield. Eventually they got into the Black Ferns' 22m are and they showed impressive continuity among backs and forwards to keep the ball alive and eventually it was lock Sophie de Goede who scored.

The Black Ferns returned the favour, however and in the 60th minute, their own continuity play resulted in the opportunity being provided when Demant set up a ruck from which quick ball saw Winiata clear the ball to wing Ayesha Leti-l'iga who had to work hard to twist and turn in the tackle to score. 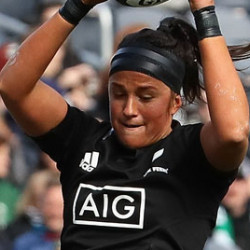 View all
All Blacks will be available for majority of Super Rugby - Foster
All Blacks coach Ian Foster said the load management of All Blacks during this year's DHL Super Rugby Pacific was a natural evolution of systems applied in the past and had not been created with the Rugby World Cup in mind.
All Blacks benefit from early season camp
An extra week for preparation, created by an earlier finish to their November tour, resulted in the All Blacks showing the benefits at a pre-season camp last month.
Every game a challenge in Super Rugby Pacific – Aaron Smith
All Blacks halfback Aaron Smith can't wait for the DHL Super Rugby Pacific to start later this month, especially for the unique challenges that are now part of the reshaped competition.
Ireland in midst of great era – Mike Gibson
Beating the All Blacks five times in eight games had shown Ireland's players they could cope with any side in the world.
DHL Super Rugby Pacific pre-season campaign locked in
From Queenstown to Auckland, fans across the country will get to experience the excitement of DHL Super Rugby Pacific with six pre-season matches scheduled across New Zealand in February 2023.
Payton Spencer shines in debut tournament
New All Blacks Sevens player Payton Spencer has made an impressive start to the 2023 season.
Rugby World Cup top of agenda for Jones
Recalled Australian rugby coach Eddie Jones plans to win the Rugby World Cup later this year in France.
Milly Mackey's Poua Pride
Milly Mackey is about as staunchly Wellington as they come.
Edwards reflects on 50 years since ‘that try’
As memories of rugby's 'greatest' try are celebrated 50 years on, its scorer, now Sir Gareth Edwards, recalled he feared his hamstrings would deny him what the All Blacks couldn't.
No let up for the All Blacks Sevens in title race
Volatility in the results from the HSBC World Series men's sevens means there is no letting up for table toppers New Zealand after their win in Sydney at the weekend.
Double gold for New Zealand in Sydney
New Zealand enjoyed a golden night in Sydney on Sunday, winning the men's and women's HSBC World Sevens tournaments with emphatic victories.
Massive final day set for Sydney
New Zealand's Black Ferns Sevens and the All Blacks Sevens each qualified for their semifinals in the HSBC World Sevens Series in Sydney on Saturday.
Solid opening day for New Zealand sides at Sydney Sevens
France gave the Black Ferns Sevens a sharp reminder of their need to focus from the outset in their second pool game of the HSBC World Series Sevens in Sydney on Friday evening.
Savea back at the helm of the Hurricanes
All Blacks loose forward Ardie Savea will captain the Hurricanes again for the 2023 DHL Super Rugby Pacific season.
Blues aiming to go one step further in 2023
Absorbing the lessons of their grand final loss in DHL Super Rugby Pacific last year, the Blues are looking to continue their improvement to go one step better in 2023.
Roderick Solo makes his mark on the Sevens stage
The All Blacks Sevens path to the final in Hamilton last weekend could have been infinitely more difficult if it wasn't for the match-winning exploits of Roderick Solo.
All Blacks and Black Ferns Sevens teams set for Sydney
Both the Black Ferns Sevens and All Blacks Sevens confidently enter the HSBC Sydney Sevens, as series leaders, following their gold and silver medal wins respectively on home soil in Hamilton last weekend.
Blitzboks set sights on All Blacks Sevens in Sydney
The All Blacks Sevens are in South Africa's sights when they meet in the HSBC World Sevens Series in Sydney at the weekend.
Historic game of three halves set for Pukekohe
The Gallagher Chiefs and Waitomo Chiefs Manawa will feature in a block-busting international pre-season double header in Pukekohe next month.
Burns signs on for Highlanders 2023 campaign
Five cap former England first five-eighths Freddie Burns will play for the Highlanders in DHL Super Rugby Pacific this year.