The Black Ferns have added another accolade to their stellar 2017 season by being named the New Zealanders of the Year by the NZ Herald.

After winning their fifth Women’s Rugby World Cup crown in August, the Black Ferns have been lauded both in New Zealand and abroad by being named the team of the year at both the World Rugby and New Zealand Rugby Awards.

New Zealand Rugby CEO Steve Tew said: “This is an outstanding achievement and one the team, and all of us at New Zealand Rugby, are very proud of. This is a great accolade that can be added to your 5 World Cup wins, and World Rugby and ASB Rugby Awards Team of the Year Awards earlier this year. Well done Black Ferns!” 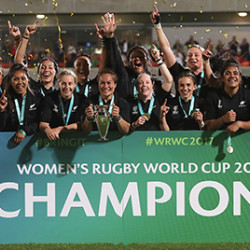