The Black Ferns Sevens beat Olympic champions Australia 22-7 in the final to claim their fifth win in the six tournament series and completed their fourth series win since it began in 2012.

QUICK TAP: CAPTAIN READ AN INSPIRAION FOR SIDE - BARRETT
Michaela Blyde was the highest try scorer in the series topping the list with 40 tries and she was the top performer over the season on the DHL Impact Player Tracker.

She said afterwards that she hadn't gone to France thinking about the bonuses on offer.

"We came here to win the world series. We didn't worry about what the rankings were coming into day two, we just wanted to make that final and win. We've done it and we're so happy about it," she said.

It had been her favourite season of her career.

"It's been a long five years. I've enjoyed every season but this one especially the most. Being in a tournament where holding the World Series trophy is pretty new for me so it's definitely a highlight of my season," she said.

Three of the team, Blyde, Ruby Tui and Portia Woodman were named in the season's dream team by World Rugby.

New Zealand captain for the tournament Tyla Nathan-Wong said: "It's an amazing feeling. It just goes to show how much heart and mana these girls have, not only here but back at home – all the girls who have pushed each other and the management that worked really hard this season.

"Finish so close to that gold last year at the Olympics, this season we really stepped it up and brought it to them. It shows – five from six and now we're world series champions," she said.

With the series title already won by winning the quarter-final, New Zealand went into their game with France still carrying an air of determination which was good enough to account for France 21-7. Blyde scored first for the Black Ferns and in the second half Whata-Simpkins and Ruby Tui also crossed the goal-line.

Australia qualified for the final by beating Canada 19-14 in a close game.

The Black Ferns Sevens scored first in the final with Tui cossing but Australia struck back through Sharni Williams to level the score. Then Niall Williams scored a try to give New Zealand a 12-7 lead at half-time.

Controlled play from New Zealand in the second half denied the Australians the necessary chances and Blyde and Shakira Baker each scored tries to round out the win.

The only tournament on the tour New Zealand didn't win was in Sydney in February when they were beaten by the United States. Australia were second in the series and Canada were third. 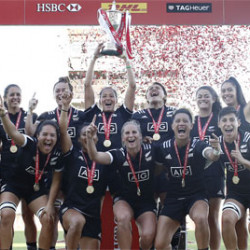