The Black Ferns Sevens will headline a new women’s sevens invitational tournament being played as part of a bonanza of sevens rugby being played at Pukekohe’s Navigation Homes Stadium this weekend.

The new tournament follows the Black Ferns debut on home soil in Hamilton in January and provides some much-needed game time before the world’s best women’s sevens teams resume the 2018-2019 HSBC World Rugby Women’s Sevens Series.
With three legs of the six-tournament Series already completed, the last time the Black Ferns Sevens played was in Sydney in February, with the next tournament in Japan next month.
QUICK TAP: UPSETS GALORE, ALL BLACKS SEVENS FINISH FIFTH
To help offset the rustiness of a nine-week gap between World Series tournaments, the Black Ferns Sevens will play against China, Thailand, a Japanese club team and the Black Ferns Sevens Development team.
New Zealand Rugby High Performance Sevens Manager Tony Philp said the tournament provides a great opportunity for all players.
“Our Black Ferns Sevens are in the middle of an extended break in World Series events so giving them the chance to prepare for and play in a two-day tournament is great.

This year the #BlackFerns7s had the honour of playing in front of a home crowd at the @NZ_Sevens - taking out the Fast Four series and finishing with a HAKA on home soil ??????
#IWD2019 pic.twitter.com/Ta3cwkLLyr— Black Ferns (@BlackFerns) March 8, 2019

“It’s another six weeks until they play in Japan so this game time is crucial in their plans as they continue to develop their squad.
“On top of that we are giving our development teams more international experience which helps prepare them for that next step up.”
Two men’s teams and seven tertiary teams will also be in action in short competitions running alongside the women’s tournament.
The All Blacks Sevens Development will be in action, with five matches against Tonga who are preparing for a World Series qualification tournament in Hong Kong.
Seven university teams will take the field to round out the festival weekend of sevens, taking part in a tertiary tournament that will run alongside the international action.
Entry to Navigation Homes stadium will be free with fans encouraged to bring a picnic along and enjoy the weekend of sevens. Matches kick off at 9.20am on Saturday.

Congratulations to all those players named in the #BlackFerns7s and @AllBlacks7s development squads ?? 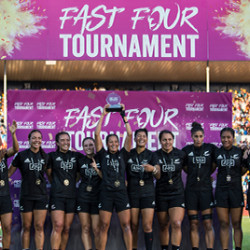