The third Bledisloe Cup match between New Zealand and Australia this year will be played in Japan, the Japan Rugby Football Union (JRFU) and New Zealand Rugby (NZR) have confirmed today.
The match will be played at Nissan Stadium, Yokohama, on Saturday 27 October.

It will be the second Bledisloe Cup match to be played in Japan, with the two teams playing at the National Stadium, Tokyo, in 2009.

QUICK TAP: WILLIAM WEBB ELLIS CUP GOES TO THE WORLD
NZR CEO Steve Tew said: “We're delighted to confirm that a Bledisloe Cup Test match will be played in Japan for the second time in the history of this great rivalry. The last match in 2009 was a fantastic event but this year's Test at the 72,000-seat stadium in Yokohama will be at another level. The All Blacks have huge support in Japan so the Bledisloe Cup Test will be important for the team as we build support ahead of Rugby World Cup 2019.”
Both the Bledisloe Cup match and the All Blacks Test against Japan the following weekend (Saturday November 3, at Ajinomoto Stadium in Tokyo) will be played at key RWC2019 venues. The All Blacks play their opening tournament match against South Africa in Yokohama (which is also the venue for the Semifinals and Final) and their match against Africa 1 in Tokyo.
JRFU President Tadashi Okamura said: “It gives us great pleasure to host the Bledisloe Cup, a long-established and classic rugby match, for the second time in this country, in the year before the Rugby World Cup 2019, at the same venue as the tournament's Final.
“We certainly look forward to two of the world rugby's leading teams moving their stage into Japan and showcasing another fierce, great battle. At the same time, it's our great hope that this match will build momentum towards Rugby World Cup 2019.” Rugby Australia CEO Raelene Castle added: “We are looking forward to returning to Japan in October for what will be an incredible event, with one of the greatest rivalries in our game being fought out a year before the same venue hosts the Rugby World Cup Final.
“The Bledisloe Cup clash at Yokohama offers a great opportunity for the Wallabies to play a major Test on Japanese soil in the lead up to the Rugby World Cup and will build the excitement in the host nation ahead of the showpiece event next September.”
All Blacks Head Coach Steve Hansen, who is in Japan on a RWC2019 planning visit, said the All Blacks' two Tests in Japan would give the team ideal preparation ahead of next year's Tournament.
“It will be great for the team to prepare in two of the Rugby World Cup cities and play at the same venues. As well as preparing for a huge Bledisloe Cup Test and another important Test against Japan, it'll also give the team a chance to have a really good 'dummy run' of the facilities, and experience the unique Japanese culture. We look forward to again being hosted by the Japanese later in the year.”
The first Bledisloe Cup Test (and opening Investec Rugby Championship Test) will be played in Sydney on August 18, with the return match a week later at Eden Park on Saturday 25 August.
The ticketing details and kick-off time for the Yokohama Bledisloe Cup Test as well as the All Blacks vs Japan Test, will be announced by the JRFU in due course.

Think you know all there is to know about the All Blacks? Check out our list of 10 unique All Blacks facts to become ultra-armed for any rugby quiz! ???? 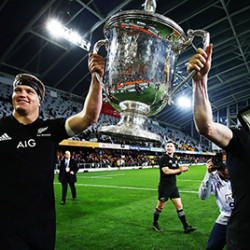