Blues' belief starts to shine through Growing belief in the Blues system was the reward in their 24-9 Investec Super Rugby win over the Stormers in Auckland on Sunday.

Coach Leon MacDonald, who has seen the side win their last three games, said he had felt right from their first round, two-point loss, to the Crusaders the side had not been too far away and Saturday night had reflected that.

"We didn't get everything right and obviously there's a few areas they changed the pictures a little the way they attacked, really stretched us across the park and we had a wee bit of trouble at lineout time so to fight back and score three tries and get something out of the game at the end I suppose was really pleasing," he said.

"I think it was the fastest, and most open game we've been involved in this year. They [the Blues] had to work really hard and on top of that there was obviously the maul pressure and the scrum pressure the Stormers were bringing."

MacDonald said there were some tired and sore bodies afterwards but overall they could be proud to get home with the win and the bonus point.

The side's maul defence had been exceptional and MacDonald credited assistant coach Tom Coventry for the work he had done in that area.

"That was a big part of their game and to be able to keep them tryless with the opportunities they had there was pleasing," he said.

MacDonald also credited the work defence coach Tana Umaga had done and said denying the Stormers tries was outstanding, especially when the Stormers had 70 percent of possession.

"Sometimes it's not all about the pretty stuff, the offloads and the clean breaks, sometimes it's about getting off the ground and making another tackle when the team needs you and we definitely did that tonight," he said.

That was especially the case after the red card to wing Tanielu Tele'a for a dangerous tackle in the last quarter.

"We weren't anticipating a happy last 10 minutes with a man in the bin and you could see their onslaught coming so to turn that around and score and take it out of reach was pleasing. And even the way we kept them out right at the very end there showed – we could have conceded a try quite easily there - but it showed that it mattered and we didn't let them in," he said.

MacDonald said the whole team had performed well with lock Patrick Tuipulotu demonstrating why he was an All Black with a strong game and second five-eighths Ma'a Nonu built on his game last week against the Highlanders with another big effort.

The loss of Tele'a had resulted from inexperience in the situation when he was caught deep and was trying to make up ground. MacDonald said he had been playing well and his concern was that it didn't dent his confidence.

"It wasn't malice, it wasn't intentional, it was one of those unfortunate things. But we've got to take care of the guy in the air so we knew [the red card] was coming," he said. 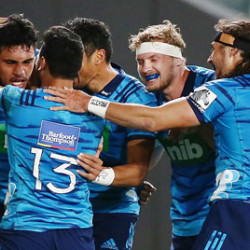