Unexpectedly thrown into the captaincy role for his final game on Eden Park, Jerome Kaino had the satisfaction of leading his side to their only home win of the Investec Super Rugby season 39–16 over the Reds on Friday.

It was an emotional night for the former All Blacks blindside flanker who was accorded a guard of honour from both teams when running onto the field with his two sons.

QUICK TAP: BRUMBIES V HURRICANES MATCH PREVIEWHe could be excused then for failing to take the kick-off, shades of the tear in the eye that was said to have contributed to Don Bradman's first ball duck in his final Test, and also for missing the final conversion of the game.

Kaino had to take on the leadership when usual captain and halfback Augustine Pulu failed a fitness test while hooker James Parsons was also unable to play.


It was fitting that the Blues managed to honour the occasion with a win, and try-scoring bonus point, but it won't live long in the memory of classic performances. South African referee Egon Seconds almost set himself up for an occupational overuse injury sending two players from each side to the sin-bin, within minutes of each other on both occasions.

Fortunately for the Blues they made better use of their numerical advantage to gain the winning impetus.

Following some early scrum and lineout problems, the Blues showed their own competitiveness in the breakdown exchanges and were able to move the ball more effectively than the Reds. That saw good ball moved quickly through the backline to create the first try for wing Melani Nanai.

In the middle stages of the first half, the Reds discipline caught the eye of TMO Ben Skeen twice – the first occasion saw a dangerous tackle on Blues centre Michael Collins by wing Jordan Petaia in the 22nd minute, then in the subsequent play Reds prop Taniela Tupou was ruled to have executed a no-arms dangerous on prop Ofa Tuungafasi in the 24th minute.

And the Blues punished the Reds for their indiscretions. First when lock Harry Hockings was ruled offside. Blues halfback Sam Nock tapped the penalty and got the ball to second five-eighths Rieko Ioane who made good use of the reduced defence to show his speed, and the effectiveness of his dummy, to score in the 28th minute.

Then moments later, No.8 Akira Ioane made a powerful break from a ruck up the centre of the field. Nock was in support to take his pass. While tackled fullback Matt Duffie was on hand to take the ball and run into space before feeding hooker Matt Moulds who broke weak tackles to score in the 30th minute.

The Reds had their best chance to score just out from halftime when issues with the Blues mauling defences resulted in two penalties but close to their line they pushed the Reds towards the sideline and in their quest to keep the ball alive the knocked the ball on in the tackle.

Ill discipline from the Reds continued into the second half and assured the Blues an easier ride, firstly when extending their halftime lead of 21-6 via a Perofeta penalty goal and then after a superb blow out from their own line with vintage running and passing among backs and forwards, it was Perofeta who crossed close to the posts.

The Reds came back with tries in the 53rd and 72nd minutes to second five-eighths Duncan Paia'aua and replacement hooker Alex Mafi, respectively scored when forwards Matiaha Martin and Sione Mafileo shared the sin-bin.

But it was the Blues who finished best, notably when returned to full strength to score off a scrum five metres from the line with No.8 Akira Ioane and replacement halfback Jonathan Ruru putting wing Caleb Clarke over for the bonus point try.

FT | @BluesRugbyTeam have done it for @jeromekaino, picking up a 39 - 16 win over the Reds. 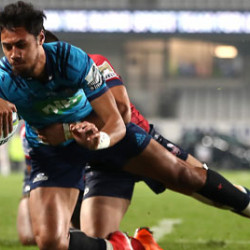