Blues need to back up well in Durban Flying out to Durban at 7am the morning after taking the Crusaders to the wire in a 22-24 loss had Blues coach Leon MacDonald excited about backing up when they meet the Sharks in the second week of Investec Super Rugby.

"It's important we back up tonight's performance again next week otherwise it will be disappointing," he said.

QUICK TAP: HURRICANES LEAVE IT LATE IN SYDNEY
It was a tough trip as they travel to Argentina to play the Jaguares in the third week so it was important they get everything right this week, he said.

MacDonald said it had been frustrating not to get the win.

"It was just a good game, it ebbed and flowed with momentum between the teams. They both had periods of good attack and put pressure in and obviously there was a big battle at set-piece time.

"If you're a purist and you enjoy a really good arm-wrestle it was definitely that," he said.

There had been a little bit of panic in the Blues towards the end in their desire to land a notable scalp. Both teams had their opportunities to grab the game and he felt a couple of small calls didn't go their way that might have helped them and there were plays that they didn't quite execute.

"On the flipside of that there were parts of the game that we were really good and applied a lot of pressure to a very good team and put them under a lot of heat.

"If we can do that for longer periods of time we will be hard to stop," he said.

The Blues came out after half time a changed team and he said they hadn't played as they trained and talked about in the first half and had probably given the Crusaders a little too much respect early on but when they got their game going they looked really good.


So far as the two penalty tries were concerned that was something they just had to suck up. When getting into the positions they did that was what could happen.

"That Crusaders pack is a very good pack. That pack has carried the Crusaders to two titles in the last two years and they showed that tonight. They were put under pressure at scrum time and they responded, that's why they are the defending champions," he said.

MacDonald was happy that there were times when they were able to break down the renowned Crusaders defence and there were plenty of ball runners and speed in the Blues and they wanted to use that as much as they could.

The two late shots at goal missed by replacement five-eighths Harry Plummer were part and parcel of his job. He had a bright future and the side would get around him.

But as MacDonald added: "I remember playing with a young Dan Carter doing something similar so it happens to everyone."

MacDonald was happy with the contribution made by centre Ma'a Nonu on his return and also the work load put in by No.8 Akira Ioane who celebrated his 50th game with a superb try.

The only injury concern involved flanker Dalton Papalii who had a hip injury but MacDonald didn't know the full extent of it. 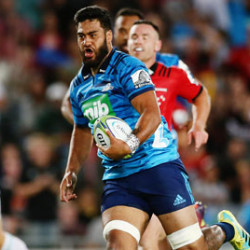