A solid Blues defensive scrum five minutes from the end in front of their goalposts at Eden Park on Saturday finally broke a 15-game losing run against the Chiefs in Investec Super Rugby when they claimed a 23-8 bonus point win.

Having just seen a potential try to returning All Blacks flanker Sam Cane denied, when he was ruled to have propelled himself forward in the tackle, the Blues applied their scrum power to drive the Chiefs back and win a penalty which soaked valuable time.

QUICK TAP: ROUND 14 HIGHLIGHTS - HURRICANES v JAGUARES
A penalty conceded by the Chiefs just on the final hooter allowed the Blues to call a lineout and from the maul replacement lock Gerard Cowley-Tuioti ploughed over to secure the bonus point win lifting the Blues to 26 points on the ladder with a game in hand.

It wasn't the prettiest of games, with occasional drizzle affected the handling of both sides and resulting in several mistakes.

Heading into the final quarter, the Blues got a decisive break when playing under penalty advantage from a midfield ruck, halfback Jonathan Ruru took the ball back to a wide open blindside. Wing Caleb Clarke took the ball to the line and then from the ruck it was prop Ofa Tuungafasi who drove over the line for the try that took the Blues out to an 18-8 lead.

Early on the Chiefs delivered a potentially psychological blow against the Blues after their scrummaging frustrations in the Hurricanes 22m area last week. At their first scrum, in the same position, the Blues worked a move with second five-eighths Ma'a Nonu, but he was held up short of the line and then at the breakdown Chiefs wing Etene Nanai-Seturo contested the ball with halfback Jonathan Ruru.

Then the Chiefs managed to clear their own line and went close to scoring with lock Jesse Parete being held up over the line by Blues lock Scott Scrafton. However, soon after a line break by Chiefs prop Angus Ta'avao created a chance wing Nanai-Seturo who kicked ahead. Blues wing Rieko Ioane came across in cover, but in the tackle with the ball, he dropped it and flanker Mitch Karpik was on hand to score.

Both sides made silly errors attempting to throw long passes. Hot on attack Chiefs first five-eighths Marty McKenzie attempted a half-field pass to Nanai-Seturo which swung more than an Elliot Boult delivery in mid-summer. Then at the other end it was Nonu whose long ball went into touch behind flanker Dalton Papalii.

Once again when mounting a multi-phase attack in the Chiefs' 22 just before the 30-minute mark, centre TJ Faiane dropped the ball and Chiefs second five-eighths Anton Lienert-Brown was onto it in a flash. He linked with Shaun Stevenson, who started in place of Sean Wainui who withdrew on paternity leave.

However, Rieko Ioane was again on hand to stymie the break out and the Blues once again cleared. And when the Chiefs turned the ball over wing Caleb Clarke went through and set up ball which was moved for No.8 Akira Ioane to give first five-eighths Harry Plummer a pass that allowed him to beat his marker on the outside and slide in for the try.

Another Chiefs handling mistake saw a scrum awarded to the Blues in the 22m and a strong run by Akira Ioane was followed by another from the breakdown and with quick hands fullback Melani Nanai was able to get the ball down in the tackle.

It was a heavy load on the Chiefs defence in the first half, they had to make 73 tackles to 21 by the Blues while the Blues dominated the ruck count 61-14.

FT | The @BluesRugbyTeam have finally broken their hoodoo against the @ChiefsRugby, beating them for the first time since 2011 and keeping their playoff hopes alive, as well as securing an important bonus point! #BLUvCHI pic.twitter.com/gnMswtihzZ— Super Rugby (@SuperRugbyNZ) May 18, 2019 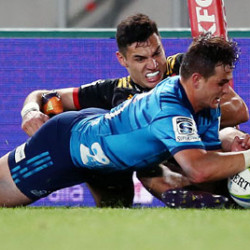