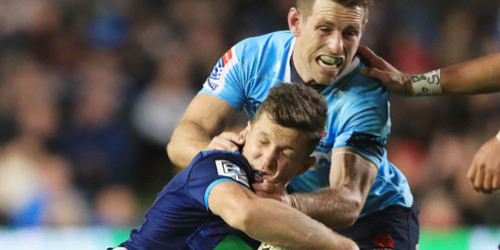 New Zealand's Investec Super Rugby streak over Australian side continues and now stands at 38 wins after the unfancied Blues beat the Waratahs 24-21 at Brookvale Oval in Sydney.

Never headed during the game, the Blues withstood a sustained Waratahs assault during the second half but the home side could only score one try, in 70th minute to captain and flanker Michael Hooper.

QUICK TAP: LAM HAT-TRICK SINKS LIONS AT THE CAKETIN
That was down to outstanding defence across the board from the desperate Blues. Loose forwards Akira Ioane (11 tackles), Dalton Papalii (10) and lock Patrick Tuipuloto (10) led the way but there was plenty of support with mid-fielders Orbyn Leger (11) and Rieko Ioane (10) shutting down the home attacks.

It was a measured, and overdue, effort by the Blues who made good use of the ball and made 12 defensive turnovers to only three by the Waratahs who enjoyed 57 percent of possession. Behind all that was first five-eighths Stephen Perofeta's goal-kicking boot which resulted in four penalty goals as a result of the Waratahs' indiscipline.

Against the run of play, the Blues opened the scoring after a long kick from a scrum that dribbled along the sideline without going out. Fullback Israel Folau, just out from his goalline, threw the ball inside to first five-eighths Bernard Foley and he passed on to second five-eighths Kurtley Beale.

He was tackled just out from the goalmouth and quick support saw the Blues turn the ball over and it was Rieko Ioane who ran from the base of the ruck to score.

The Blues went close again after absorbing Waratahs pressure in their own 22m area. As they build their phase attacks, halfback Augustine Pulu effected an intercept and gave the ball to Rieko Ioane who raced nearly the length of the field. But a despairing chase by wing Cameron Clark brought him down a metre or two short of the line.

Ioane got up and grounded the ball but referee Jaco Peyper ruled he had been held long enough in the tackle to need to play the ball, which he hadn't.
Clark featured again, but in an offensive play in the 20th minute when he appeared headed for the goalline after a break by Folau. But cover defender Papalii took Clark high and was sin-binned for his efforts.

From the lineout in the corner the Waratahs employed their lineout drive and it was hooker Damian Fitzpatrick who scored.

However, in attempting to clear his line from a penalty, Foley allowed the Blues to build their attack and when Perofeta stepped through the backline and found fullback Matt Duffie with a backhand pass, the chance was on the outside for wing Tumua Manu on the end of a long pass and he made no error in scoring.

The Waratahs struck back immediately when Folau took the restart and built play which saw Beale and Folau combine to take the ball to the line and from the goalline ruck prop Sekope Kepu took the ball from the base and drilled around the shortside to score in the corner.

Hooper backed up one of the rare cohesive assaults through 18 phases to score in the 70th minute off a precise pass from Beale.

The second five-eighths late in the game looked to kick to the corner where Folau was looming but the ball flew over the sideline giving the Blues the chance to eat up valuable time. And while they lost a valuable lineout, the Waratahs coughed up ball to leave the Blues with their third win of the year.