Brumbies lineout maul too much for Blues Unable to secure a ready supply of ball, and having their scrum and lineout put under pressure, the Blues had to concede a 21-26 Investec Super Rugby loss to the Brumbies in Canberra on Saturday.

In spite of having to recover from their round-the-world tour, the Brumbies sucked the life out of the Blues with a succession of scrums that saw props Alex Hodgman and Ofa Tuungafasi sin-binned in each half respectively, and then by kicking to the corners they were able to unleash their powerful lineout drive.

As a result hooker Folau Faingaa scored three times and took his tries in the competition to 10, the leading scorer in Super Rugby this season.

It wasn't the prettiest rugby but it was enough to give the Brumbies a share of the lead in the Australian Conference. The Blues still managed to carry for 377m compared to 270 by the Brumbies, but they conceded 15 penalties to nine and that proved the difference.

What was frustrating for the Blues was that they made their most impressive start of the season to get out to a 12-0 lead in the first 10 minutes.

Their first try after nine minutes resulted from fullback Melani Nanai slipping his hands through a gap to give centre TJ Faiane a chance down the left flank. It was the result of the Blues working the blindside consistently and pressuring the home defence.

Then as the Brumbies looked to move the ball in midfield an attempted long pass by first five-eighths Christian Lealiifano was picked off by left wing who had a 50-metre clear run to the line.

The home team got into the game finally after a no-arms tackle off the ball by prop Alex Hodgman was ruled cynical by referee Damon Murphy and he was sin-binned for the offence. That allowed the Brumbies to kick to the corner and their rolling lineout maul did the rest for Faingaa to cross for the try at the back of the maul. 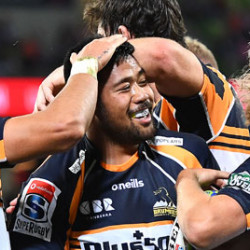