Bury McCaw and bury the All Blacks - former Wallaby The Wallabies have been urged to try what few have achieved - to successfully bury All Blacks captain Richie McCaw under a pile of rucks and mauls in Saturday's Philips Tri Nations Test in Auckland.


Former Wallabies flanker of the 1980s and now Brisbane club coach Chris Roche said McCaw, again the stand-out player when the All Blacks clinched the Bledisloe Cup 13-9 in Brisbane last month, required special treatment if the visitors were to have any chance.

"The Wallabies have to try and bury him. If you are playing against a good backrower, you have to bury him under the rucks and mauls," Roche told The Australian newspaper.

"At the end of the day you want Richie McCaw on the ground and the ball gone."

Roche suggested the Wallabies forwards attack the space between halfback Byron Kelleher and first five-eighth Dan Carter to try and commit McCaw to the breakdown and keep him out of subsequent phases.

"You have to create the breakdown you want. You just don't throw it out the backs and hope you recycle the ball."

But that will depend on the Wallabies' tight five, who must gain parity for their loose forwards to have any impact, Roche said.

Wallabies coach John Connolly kept faith with his props Greg Holmes and Rodney Blake who have struggled to compete with All Blacks scrum anchors Tony Woodcock and Carl Hayman this year.

"Richie McCaw is a great player but he's operating behind a forward pack that is doing well."

Not only are the Wallabies shooting for their first win against the All Blacks since 2001, they are battling a woeful away record in recent years.

Connolly, whose only away Test since taking charge this year was the 12-32 loss in Christchurch last month, admitted the away form was a big issue.

"It's a damning statistic, no doubt," Connolly told the Daily Telegraph.

But the Wallabies' performance in Brisbane on July 29 when they were a late try away from a major upset, ensured they had "no fear" of the All Blacks.

Connolly said the away record was "a mental issue" which he was confident of addressing.

"I think mentally we're good. Tactically we have a very strong idea of how we want to play.

"Our line-out will definitely stand up. While we don't expect to dominate the scrum, we expect to win our own ball. We've also learned more about how to play them at the breakdown."

The Wallabies flew to Auckland today with three changes to their starting line-up from the 20-18 win over South Africa -- flanker Phil Waugh for George Smith, hooker Jeremy Paul for Tai McIsaac and wing Clyde Rathbone for Mark Gerrard. 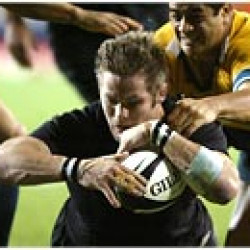