Canterbury makes it two in a row It was Canterbury'seventh championship in the 34-year history of the NPC and for Wellington the dismal record in finals continued. It was the sixth time in the last six years that Wellington had made the final without going on to win it, Canterbury having beaten it in three finals.

When wing Sean Maitland scored a spectacular solo try in the 61st minute, Canterbury went ahead, 25-10, and the 12,000-strong home crowd was baying for victory. But Wellington has proved itself a gritty second-half competitor and closed to 25-20 with seven minutes to play and Canterbury had its fullback Colin Slade in the sinbin.

Yet Canterbury was not to be denied.

It had lost the Ranfurly Shield to Southland in its last challenge and it was determined not to let a second piece of silverware to be stolen. In the 77th minute, Canterbury received a penalty at a ruck and first five-eighths Stephen Brett was on target, slotting his fourth kick from six attempts to ensure the home team a deserved victory.

Canterbury made a sensational start. Wellington failed to protect the ball after first five-eighths Piri Weepu had put his side on attack after two minutes and the loose ball was grabbed by captain and flanker George Whitelock who combined with his brother, lock Sam, to put fullback Colin Slade away on a 60m sprint to the corner, Brett landing the wide conversion.

Weepu had Wellington's first chance score in the seventh minute, but his 40m angled penalty kick just went wide. Wellington hands in the scrum in the 16th minute gave Brett his first penalty chance from 33m on the angle and he made no mistake to take Canterbury to a 10-0 lead.

Centre Casey Laulala tested Wellington's defence in the 24th minute with a kick-and-chase to 10m from the visitor's line, but Canterbury conceded a penalty at the breakdown. Both teams were giving away too many penalties in the first quarter.

Canterbury kept the pressure on Wellington, second five-eighths Tim Bateman missing a dropped goal from nearly in front, but Wellington was caught off-side in the 29th minute and Brett had no trouble in slotting the kick from 17m and near the left post for a 13-0 lead.

Weepu got Wellington on the board with a 42m penalty kick after 31 minutes after a ridiculous call which penalised Canterbury's No.8 Nasi Manu for taking a catcher in the air when he clearly didn't.

Undeterred, Canterbury hit back on attack with a superb kick to the corner by Brett which Weepu carried into touch. From the lineout, Canterbury drove to the line before the backs were set alight with Laualala putting Slade in a half gap and the fullback had the speed to cruise to the line, Brett missing the conversion.

It was vital Wellington scored first in the second half and Canterbury nearly played into their hands by trying to run the ball from behind its goal-line, a scrum penalty bringing needed relief after 43 minutes.

Wellington centre Alapati Leuia needed a kind bounce of the ball to score after 47 minutes, but fortunately for Canterbury it rolled away from him when he was in the clear. Then it was Slade's turn to grasp a Wellington cross-kick and put a kick ahead which just eluded a chasing Sean Maitland.

Canterbury's intention of throwing the ball around at every chance backfired in the 52 minute when a Slade high pass was comfortably intercepted by Leuia who trotted 20m to score under the cross-bar, Weepu kicking the easy conversion to close the gap to 10 points.

But Maitland scored the try of the final starting the final quarter, charging onto a Brett pass 40m out and scything through three tackles to score a brilliant try which Brett converted for the defending champion to go out to 25-10 lead.

Weepu closed the gap to 12 points with a 31m penalty after 64 minutes and Slade was sinbinned for a professional foul two minutes later, Wellington not taking the shot at goal. Wellington replacement Fa'atonu Fili was heading for a try in the 68th minute after a chip kick went into his hands, but he was called back for off-side in a marginal decision.

It was all Wellington now and with Canterbury a man down, the ball was transferred along the line for replacement Scott Fuglistaller to score wide out and Weepu converted to have the visitor only five points behind.

With three minutes to play, Wellington conceded a penalty at a ruck 36m out and Brett struck it sweetly to put Canterbury ahead, 28-20. As well Slade came back from the sinbin.

Canterbury kept it close to the forwards as the clock wound down and shut Wellington out in the dying minutes. 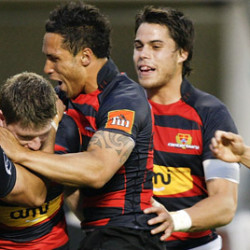