That lineout superiority resulted in Black Ferns captain Fiao'o Faamausili scoring a hat-trick of tries in the five tries to one victory.

Showing a level of awareness in their intent the Black Ferns made the most of their opportunities in the first half. Australia looked to pin them down in their 22m area, but each time the New Zealanders cleared their area with confidence.

QUICK TAP: "THIS IS MY COMEBACK" - ALENA SAILI They had been stretched when electric and consistently dangerous fullback Mahalia Murphy ran one downfield kick back at them and it took some scrambling before the movement was halted, with New Zealand quickly turning the pressure back on Australia.

Australia started well in the scrummaging but their efforts were spasmodic compared to the consistency New Zealand managed in set-piece plays.

But it was in moving the ball, with forwards and backs inter-changing with effect that marked the difference between the sides.

"Fi, you're a hungus!" - @sumostevenson as the Captain picks up a hat-trick for the #BlackFerns #AUSvNZL #DoubleHeader pic.twitter.com/Cj8oHOeLmN— Black Ferns (@BlackFerns) August 18, 2018


That was seen when halfback Kendra Cocksedge scored the opening try 11 minutes into the game. The ball was moved to the right where wing Renee Wickliffe was forced to do some tidying up. But in stepping past the bunched Australian defence she opened a hole to feed Cocksedge into space for the try.

The second try, scored by Faamausili came from a lineout drive which Australia looked to have pressured before Faamausili broke around the side of the maul and along the sideline to score.

Australia lost No.8 Grace Hamilton for taking down a maul just out from the line, eight minutes from halftime. Australia did well to deny New Zealand in the immediate plays but another penalty on their 22m saw Cocksedge tap the ball and race ahead. Lock Charmaine Smith drove toward the line before prop Aldora Itunu, who had already made her presence felt with some stunning tackles, was able to drive ahead and reach out for a try, a minute after the halftime hooter had sounded.

In the second half the Australian loose forwards came into their own with some storming runs led initially by flanker Georgia O'Neill who made one fine run to link with Emily Chancellor and when Hamilton started running off the back of scrums, there was a more efficient look to the Australian attack.

However, the pressure of the tackling they endured meant the required support wasn't always at hand, and New Zealand time and again drove the Australians back. There was time for prop Emily Robinson to land her second penalty goal.

But heading into the final quarter, a thrilling run by debut Black Ferns wing Alena Saili provided a chance which only ended when Chancellor pulled off a superb cover tackle on Wickliffe as she looked to complete the move.

These two teams will face each other again next week at Eden Park, prior to the @allblacks Test.#AUSvNZL #DoubleHeader pic.twitter.com/0GkplyQTHE— Black Ferns (@BlackFerns) August 18, 2018


While there wasn't a try from that play soon after the Wallaroos were penalised and from the lineout, where the ball was thrown to the front of the line, it was trytime again for Faamausili after a well executed rolling maul. Then on the opposite of the field in the 68th minute an action replay saw the hooker complete a hat-trick from another lineout drive.

Australia finally had some reward after a run through midfield by replacement prop Hana Ngaha rumbled downfield to set up a ruck when centre Atasi Lafai broke into space to link with Chancellor who raced ahead and found replacement loose forward Alisha Hewett to run in the try. 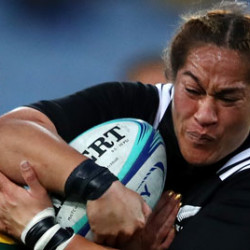