Two Chiefs tries in two minutes with 10 minutes left undid Sharks hopes of completing an unbeaten Investec Super Rugby tour of Australasia when they went down 23-29 at FMG Stadium Waikato on Saturday.

But even more important, in injury time, was a fingernail hold secured by tireless lock Tyler Ardron on the jersey of Sharks five-eighths Curwin Bosch as he looked to clear out to score and break Chiefs' hearts.

The Sharks mounted an 18-phase surge after the hooter but finally coughed up the ball which was booted well into the grandstand by Chiefs skipper Brad Weber.

QUICK TAP: HIGHLANDERS WIN A BOOST AHEAD OF TOURThe win lifted the Chiefs off the bottom of the New Zealand Conference where they are two points ahead of the Blues while the loser's bonus point took the Sharks into the lead in the South African Conference.

It was a game that ebbed and flowed with the Chiefs having to absorb some bone-crunching ball-in-hand surges from the South Africans but their defence was up to the task in a game where many of the statistics were evenly shared, although the Chiefs tackle count raced ahead in the frenetic last minutes.

Ten minutes earlier it was a solid build-up with several efforts by the pack to get over the line before the ball was released in the 67th minute to first five-eighths Marty McKenzie, who had another impressive game, before he fed second five-eighths Anton Lienert-Brown into a gap to score the try.

Still one point down, Chiefs fullback Solomon Alaimalo took the restart and fed replacement midfield back Alex Nankiville running towards him on an angle. A huge gap opened up and Nankiville ran hard taking the ball wide before linking with Alaimalo inside him. He cut back further inside before unloading to Weber who scored his second try of the night.

A key area of Chiefs execution was in turnovers won which favoured the home team 10-4. Flankers Mitch Karpik and Jesse Parete, No.8 Luke Jacobson and lock Tyler Ardron were especially effective but it was the defensive effort of the entire pack, all of them contributing to the final tackle count, that eventually wore down the Sharkes.

The home team also had to cope with the 55th minute sin-binning of hooker Nathan Harris ruled to have made a cynical infringement in the Sharks' attack zone.

From the penalty, the Sharks got themselves into position to secure another penalty which was kicked to the corner and after their maul was initially held up, the bulk of lock Ruan Botha was put to use in a drive at the line and he got the ball down on the line to draw the Sharks back into the lead.

The Chiefs had to mount some desperate defence as the big Sharks pack mounted some long periods of continuity play deep in their territory but they were let down by dropped ball in key moments. They also looked to involve their back three, wings Makazole Mapimpi and Sbu Nkosi and fullback Aphelele Fassi, as often as possible.

But having absorbed all the pressure, it was the Chiefs who broke out when prop Atu Moli made a big bust through the midfield before getting the ball off with McKenzie breaking through and linking with wing Sean Wainui, who passed on to halfback Brad Weber to score in the 25th minute.

No.8 Luke Jacobson conceded a penalty when infringing at a breakdown and first five-eighths Curwin Bosch landed the goal.

Just some of the nicknames floating around the #SuperRugby teams ??#SayMyName pic.twitter.com/JjhhUzSrVT— Super Rugby (@SuperRugbyNZ) May 9, 2019


Then within a minute, at the restart, Sharks halfback and skipper Louis Schreuder to lob a high box kick. Alaimalo couldn't control the ball and Nkosi grabbed and then got the ball back off Chiefs players for lock Hyron Andrews got through and galloped 35m to score.

With scores level, the Sharks conceded a breakdown penalty and after a kick to the corner, the Chiefs worked a move off flanker Jesse Parete's take which saw Harris run around to take the ball and feed it to Lienert-Brown. He was tackled but Karpik raced in to pick up the ball and drive low to regain the lead for the Chiefs.

FT | @ChiefsRugby defence holds strong to force a turnover and clear for touch to pick up a crucial win over the Sharks!#CHIvSHA #RaiseTheStakes pic.twitter.com/4k6dH8kOl4— Super Rugby (@SuperRugbyNZ) May 11, 2019 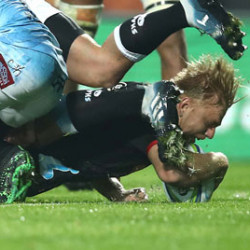