Chiefs maintain their dominance over the Blues

Unable to break the Investec Super Rugby stranglehold the Chiefs hold over them, the Blues fought all the way but it was the home team who claimed a 33-29 win at FMG Stadium in Hamilton on Saturday.

It's 16 games since the Blues have beaten the Chiefs but they did retain their third position in the Conference with a bonus point coming for finishing within the seven point margin.

QUICK TAP: CRUSADERS STORM HOME OVER HIGHLANDERS
The Chiefs, who now sit fourth in the Conference, withstood early Blues pressure to score two tries in the first half and developed confidence from that in what became a game that ebbed and flowed with one team scoring and the other responding.

But that early Chiefs margin ensured they were always in front and in spite of some stirring Blues assaults the visitors couldn't quite carry the day. The Blues carried for 628 metres as they probed for gaps and made 200 passes to 92 by the Chiefs. They beat 35 defenders to 17 forcing the home side to make 154 tackles to 75. But it was their 17 turnovers conceded to 12 that worked best for the home team and they used it to the full.

Against the run of the early play, Chiefs halfback Brad Weber picked off an attempted inside pass from Blues hooker James Parsons to halfback Jonathan Ruru and raced 60m to score.

In spite of scrum pressure being applied by the Blues, with loose Angus Ta'avao getting a warning for repeatedly losing his bind, the Chiefs put their lineout drive to use and after a 13-phase build-up in which fullback Damian McKenzie kept popping up at key moments, the foundation was laid for flanker Lachlan Boshier to drive over from a goal-line ruck.

It was only Blues' handling issues that denied them a better first half outcome, although they did have the satisfaction of showing their latent attacking ability in the final moments of the half.

From a scrum close to their own line, No.8 Akira Ioane broke from the base on the blindside making ground close to halfway where brother Rieko raced in as support and gave the Blues impetus to work the ball from side to side. Prop Karl Tu'inukuafe featured with some deft handling before fullback Melani Nanai was put into space to score.

One minute into the second half, Damian McKenzie was forced to leave the field with a knee injury. But it didn't lessen the Chiefs' intensity as the forwards used their lineout drive to great effect again before the ball was released for second five-eighths Anton Lienert-Brown broke inside. When halted, replacement Ataata Moeakiola charged over for the try within three minutes of taking the field.

Both sides probed, through some exhausting phases, in the third quarter but it was the power of the Blues scrum that prevailed in the 57th minute when from a second scrum, five metres out from the Chiefs line, it was second five-eighths Ma'a Nonu, who had another powerful game, that raced in on the angle to take a short pass from replacement halfback Sam Nock to blast through the defence to score.

The contest took another twist when the Chiefs had reward for their kicking game driving the Blues back as fullback Solomon Alaimalo entered the line, dropping the ball behind him in the tackle. But right wing Sean Wainui contrived to chip the bouncing ball to himself to run into space before Boshier was on hand in support to drive over beneath the posts.

Then pouring on the tempo from the restart the Blues secured the ball and centre TJ Faiane raced into a gap and went hard for the corner. While tackled, Rieko Ioane produced his own piece of class in corkscrewing in a confined space to get the ball over in the corner with his left hand just inside the corner flag.

Conceding a penalty when attempting a midfield move, the Blues were pushed right back onto their line when Marty McKenzie pushed a superb kick into the corner, allowing the home team to launch their pack at the line and after several strong drives, and even stronger defence from the Blues, it was replacement No.8 Jesse Parete who scored.

The Blues weren't finished however, as they launched a 17-phase assault on the Chiefs and again it was Nonu, from another close quarter ruck, who crossed to get the Blues back within four points, but in the end it wasn't enough.

FT | @ChiefsRugby hold on to take the win over the @BluesRugbyTeam. What a match!#CHIvBLU #RaiseTheStakes pic.twitter.com/jNFwqhqr6t— Super Rugby (@SuperRugbyNZ) April 13, 2019 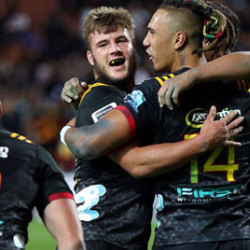