Chiefs not consumed by the Pocock effect Brumbies flanker David Pocock has the Chiefs on high alert for their Saturday afternoon Investec Super Rugby game in Hamilton not only for his own abilities but also the chances he creates for others.

Chiefs assistant coach Neil Barnes acknowledged Pocock's world-class and countering him would be important but also had the capacity to be a distraction.

QUICK TAP: CHIEFS V BRUMBIES PREVIEW
If he became the focal point of the Chiefs' concentration it created chances for his teammates to fill the void.

"We've talked about winning the race at the breakdown and he's just one of many players who will hurt you if you don't do that. He's definitely a threat, he's world-class and earned the respect that he's got so we're up for the challenge."

But the Brumbies generally had earned Barnes' respect over the years.

"They're a very clinical team. I thought when you looked at the game they played against the Hurricanes last week they're a threat to everybody. They're a very good forward pack and the backs have got great strike power. We're taking nothing for granted here at all," he said.

"Normally they like to dominate you up front and play positional on the field and I don't see that changing a lot and they've got a lot of big ball runners as in [Tevita] Kuridrani so you've got to be able to handle those people.

"But sometimes it's the simple things in the game; winning all the collisions, winning the races, being more excited than the other team, being more clinical when you've got the ball in your hand. We'll look after what we have to do but at the same time respecting what they bring to the table."

Ideally, the Chiefs would like to replicate the fast start they produced to swamp the Highlanders 42-0 by halftime, but that would be a challenge. He hinted even the coaches had been caught by surprise by the intensity created.

He said they had been tinkering with things and it had panned out on the day.

"I'd like to think we're working hard to get them in exactly the same position this week and it's up to the boys to put it on the paddock when they come out. We can take a lot of confidence about the way we started last week but that's past now and we have to start over again and bring the same excitement and the same results," he said.

Barnes explained that centre Anton Lienert-Brown had carried a heavy workload for the side and deserved his required break while Sean Wainui had the chance to play centre and was close to being player of the day for the side last week in their win over the Highlanders when playing on the wing.

"He's fitted into the outside back role but he's a natural centre as well. He's a big man and carries hard and they'll have to contain that and he'll defend quite well as well," he said.

Hooker Nathan Harris was 'champing at the bit' to play, he said after his paternal leave, but he would also have seen how well Liam Polwart played last week and would be keen to reclaim his starting spot.

There was also recovering strength in the loose forwards and Lachlan Boshier had been named on the bench to give him his first opportunity since coming back from injury during which time Mitch Karpik had been in fine form for the side. And Luke Jacobson had been playing so well on the blindside of the scrum that he was keeping other players out of contention as well.

Barnes said Jacobson was "a hard worker and he's got heavy shoulders. If you're going to get tackled by him you are going to know about it. He cleans out and is quite an intelligent player and his game has grown and grown, so I'm really pleased for him."

Here’s YOUR Gallagher Chiefs team to take on the Brumbies this weekend! Early kickoff at 5:15pm so make sure you’re there ?? #CHIvBRU #ChiefsMana pic.twitter.com/DxC4OLghQE— Chiefs Rugby (@ChiefsRugby) July 5, 2018 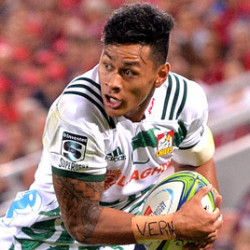