Brilliant Brodie Retallick may never play a more important game for his Chiefs as they claimed a 39–27 win over the Waratahs at FMG Stadium Waikato in Hamilton on Saturday.

Twice he demonstrated the all-round qualities that make him such a forward of significance when picking off turnover penalties at vital stages in both attack and defence, the second extinguishing a final chance for the Waratahs and allowing the Chiefs to clear the line and set the terms of an absorbing encounter.

Employing a kicking game played at top pace the Chiefs came back from a 0-14 deficit to go to the break 19-14 up and while the Waratahs got back to 24-24, it was the Chiefs who had the stamina to see out the win with first five-eighths Damian McKenzie scoring his second, and a bonus point try, from a scrum after the final hooter had gone.

But for parts of the game it seemed his conversion collisions with the Hamilton goalposts could undo his side. Three attempts hit the posts and were unsuccessful

But it was Retallick's godfatherly influence over another inexperienced Chiefs unit who defied the injury curse that has afflicted the side while flanker Mitch Karpik let off some of the frustration of his own injury woes to have an outstanding clash in the loose with Australian Test flanker Michael Hooper.

Early indecision among the Chiefs rearguard resulted in a Bernard Foley kick into the Chiefs' 22m area producing the first try scoring chance. From a Waratahs scrum, the ball was moved wide with left wing Taqele Naiyaravoro joining the line at centre to feed right wing Cameron Clark the ball with enough room to race along the touchline to score after four minutes.

Eight minutes later, from a lineout and a backline with bunched players in midfield, saw second five-eighths Kurtley Beale choose his target precisely for centre Curtis Rona to run into space and get over for another effective set-piece try.

However, the Chiefs' policy of moving the Waratahs pack around paid dividends during the second quarter when more gaps were opened. The Waratahs tackle count rose and at the break they had made 68 tackes to 42 for the home team while missing 17 of their tackles compared to 10 by the Chiefs.

The home recovery started in the 16th minute when Waratahs halfback Nick Phipps kicked the ball out on the full and from the resulting play the Chiefs mounted an attack at the line with a strong maul before the ball was released and it was McKenzie whose pass found Retallick coming back on the slightest of angles to go over beneath the cross bar.

Then as play opened up, for both sides, there was sweeping action with the Chiefs defence holding out promising Waratahs assaults with Naiyaravoro denied a chance. But in the 28th minute the Waratahs tried to run the ball from deep within their own territory.

However, at a breakdown seven metres out from the line, the ball appeared at the back of the ruck but there was no halfback and Chiefs No.8 Liam Messam pounced and fed the ball to hooker Nathan Harris for the try.

Four minutes later a long lineout throw was taken by second five-eighths Charlie Ngatai and the lively Karpik was on hand to take his pass then the ball was taken on by centre Anton Lienert-Brown and wing Toni Pulu, it was McKenzie who took the final pass to roll over in Folau's tackle to claim the lead for the first time in the game.

The kicking game at the start of the second half saw the long throw used again, and Ngatai claimed the ball again which stretched the Waratahs' defence with centre Anton Lienert-Brown getting outside Rona and allowing fullback Solomon Alaimalo and Wainui to go close to scoring on the left flank. But the ball was moved back across field and while a McKenzie pass went behind Pulu, he still got back to claim the ball, change direction and slip through the defence for the try.

Almost immediately, the Waratahs unleashed another set-piece play from a lineout and while a long pass to Israel Folau went to ground, he recovered it much as Pulu had moments earlier, but he reversed the ball to Beale who took the half chance to score and level the scores at 24-24.

Five minutes later the Chiefs were back in front after Weber kicked from the base of a ruck to deep in the 22m area and Pulu had too much pace in the unprotected space to reclaim the lead. 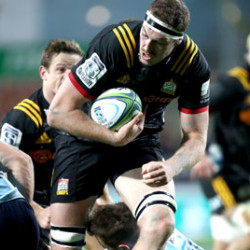