Chiefs pushed all the by the Blues It took 73 minutes, and a penalty try, but the Chiefs got their win 21-19 over the Blues in their Investec Super Rugby game at FMG Stadium Waikato in Hamilton on Saturday.

It was a close run thing against a defiant Blues defence but the home team had more opportunities to score and in the end were deserving winners, but they will carry the bruises as a result.

Heading into the final quarter there was a sense that the Blues appreciated the opportunity they had, this in spite of the Chiefs carrying the ball twice as far in the game, making three times more clean breaks and twice as many offloads.

QUICK TAP: CRUSADERS SET FOR FAST START v JAGUARES
But it was in the turnovers the Chiefs conceded that the Blues minimised their losses and used that to keep themselves in the game.

However, with only seven men in their 73rd minute goalline scrum with lock Josh Goodhue in the sinbin, the Blues paid the price when they collapsed a third scrum and the penalty try was awarded.

It was a disappointing blow for a much-improved Blues side but it showed they were capable of playing a more defence-based game when it had deserted them a week earlier.

The Chiefs extended their unbeaten run to 14 against the Chiefs with their win.

Turnover skill initially proved impressive again for the Chiefs after the Blues looked to have secured ball. It was moved quickly with first five-eighths Damian McKenzie completing a double round with fullback Solomon Alaimalo to quickly complete the transfer to left wing Sean Wainui for the opening try in the 12th minute.

Having shown much more defensive mettle, the Blues impressed in holding out some determined Chiefs backplay, where fullback Solomon Alaimalo and centre Anton Lienert-Brown were showing all their skills. However, substantial blows were suffered by both sides in the 31st minute: McKenzie left the field with a hip injury and flanker Jerome Kaino left the field with a hamstring injury. Centre George Moala also departed with a shoulder injury for the Blues.

But in bringing ball back down field flanker Kara Pryor, who was a defensive dynamo, showed his skill in completing a double round of centre Rieko Ioane, and freeing up No.8 Akira Ioane for a strong burst down the sideline which turned the defensive pressure back on the Chiefs as he almost made the line.
Sensing their opportunity, the Blues threw everything at the rucks on the Chiefs goalline and it was hooker James Parsons who emerged to get the ball over the line for the equalising try in the 35th minute.

Perofeta, who had two horror restarts in the first half, did redeem himself with one sharp run off a Chiefs kick ahead which he ran back with interest, and four penalty goals to go with his conversion to give the Chiefs a 19-14 halftime lead.

Pryor's presence on the openside flank bolstered the side's defensive effort while lock Josh Goodhue demonstrated why he was getting another start with some powerful work around the breakdown area and in his tackling. He personified the old tight forwards' requirement of nose down and tail up in the coalface area. However, he did blot his copybook with his yellow card for not rolling clear at a goalline ruck with 13 minutes remaining.

Chiefs bulwark Brodie Retallick had a quiet first half by his standards, but as the need increased in the second half he became much more prominent, especially with his midfield sorties to punch holes in the defence and then slipping offloads to supporting players.

Captain Sam Cane also started to feature more, although penalties by him and other members proved costly, especially in potential scoring situations.

The Chiefs also opted for lineout drives rather than shots at goal in the third quarter but were unable to utilise their chances in the face of torrid Blues defence.

FULL TIME: We've come out on top in a tight game against the Blues! Five wins on the trot now ? thank you for your support! #CHIvBLU #ChiefsMana pic.twitter.com/zmrYOIo0Xg— Chiefs Rugby (@ChiefsRugby) April 7, 2018 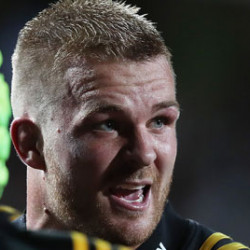