Another hard fought, close contest denied the Chiefs a bonus point 27-20 win over the Sunwolves back on home turf in Hamilton on Saturday.

A hectic final few moments saw the Sunwolves firstly lose second five-eighths Derek Carpenter to the sin-bin for a deliberate knock down and then from the same phase of play, replacement fullback Jamie-Jerry Taulagi was sent off for using his shoulder to the head of replacement Chiefs wing Shaun Stevenson.

QUICK TAP: BLUES CONTINUE THEIR QUEST FOR IMPROVEMENTYet with the penalty, and a scrum taken, in front of the goalposts, the Chiefs summed up their woes of recent weeks by lacking the finish to be able to score what would have been the bonus point try. Instead, it was the Sunwolves who claimed the bonus point for finishing within seven points, and in many ways that was a credit to their determination on the night.

The first half was a fascinating mix of intent: the Chiefs looking to regain their mojo back at home after disappointing form overseas and the Sunwolves looking to show the benefits of their first tour to New Zealand.

As a result defensive play dominated. The Sunwolves attempted to work their way through the defences with mid-fielders Carpenter and William Tupou took some heavy tackles as they attempted to work through perceived gaps in the defence. The Sunwolves had one prolonged period in the Chiefs 22m area, where several scrummaging issues emerged, including the loss of tighthead prop Heiichiro Ito with a rib injury in the 17th minute.

All the Sunwolves had to show for their work was a penalty goal, in the 20th minute, to first five-eighths Hayden Cripps.

The Chiefs had made an early impact when hooker Hika Elliot got over the line after Cripps failed to clear the kick-off and left his side pinned on defence.

It was the 23rd minute before they scored again, after some strong runs by locks Taleni Seu and Dominic Bird, and the home loose forwards, Sam Cane, Tom Sanders and Mitch Karpik. The ball came back from a ruck close to the line and with first five-eighths Aaron Cruden offering a lobbed pass to space, into it sped fullback Damian McKenzie who then timed a fine pass to wing Solomon Alaimalo to score.

That feeling when you see the try-line... #CHIvSUN pic.twitter.com/jc7mBSXKXz— Super Rugby (@SuperRugbyNZ) April 29, 2017 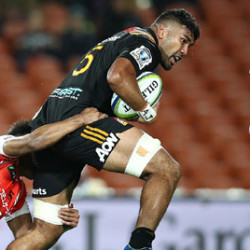